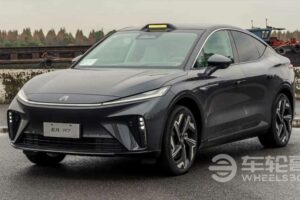 The Tesla Model Y was the best-selling electric crossover in the United States last year and also the sixth best-selling vehicle in the country with about 252,000 units delivered to customers. In China, however, the EV faces fierce competition from local automakers and one of the new additions to the zero-emissions SUV segment in the country is the Rising Auto R7. This isn’t a popular name here in the US but it has quite an interesting story.

The R7 was previewed by the ES33 concept during the Shanghai Auto Show in April 2021 when it was introduced by the R brand established as a standalone EV automaker from Roewe, in turn, owned by SAIC. Shortly after the debut, the marque was renamed Feifan and eventually received the name Rising Auto. That brand launched the production version of the electric crossover concept and called it the R7.

The R7 is a typical five-seat crossover with a sloped roofline and our colleagues and friends at Wheelsboy recently reviewed the vehicle in China. In the video attached atop this page, you can see a quick review of the R7 Performance, which is the model’s most powerful variant with a dual-motor setup and a peak output of 536 horsepower (400 kilowatts) and 516 pound-feet (700 Newton-meters) of torque. In this configuration, the model accelerates from a standstill to 62 miles per hour (0-100 kilometers per hour) in just 3.8 seconds, which is quite impressive.

Unfortunately, the test driver points out that the braking, ride quality, and handling don’t match the vehicle’s performance. They are all fine – no huge black marks and everything is “acceptable,” just not up to the standard you’d expect from a 536-hp (400-kW) electric crossover.

How’s the interior quality, cabin space, and driving experience? All the answers are in the video at the top of this page. How does the Rising Auto R7 compare to the Tesla Model Y? We’ll leave that part to you, our readers, to share with us in the comments section below.