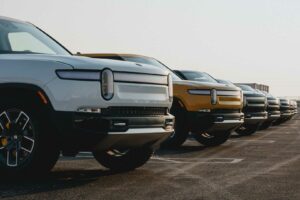 Rivian has just announced its electric vehicle production and sales results for the second quarter of 2022.

During the period, the company produced at its manufacturing facility in Normal, Illinois, 4,401 BEVs, which is 72% more than in Q1. Sales amounted to 4,467.

It means that Q2 was better than the previous two quarters combined – a good sign of a progressing ramp-up.

Rivian does not disclose the numbers for particular models, so those are the total values of three BEVs: R1T pickup, R1S SUV and EDV 700 vans for Amazon.

So far this year, Rivian produced almost 7,000 electric vehicles, and sold close to 5,700.

“These figures remain in line with the company’s expectations, and it believes it is on track to deliver on the 25,000 annual production guidance previously provided.”

Rivian CEO RJ Scaringe thanked the team and suppliers for contributing to the result:

The production volume must continue to increase towards much higher levels to catch up with demand.

Rivian has an advantage of being first on the market with an all-electric pickup, and a unique quad motor platform for pickup/SUVs, but the competitors are coming. Most recently, Ford announced 1,837 Ford F-150 Lightning pickup sales in June, saying that it was the #1 electric pickup for the month.