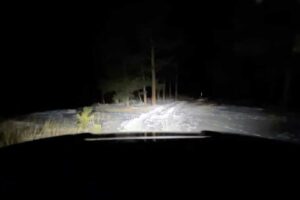 Effortless is the word best used to describe a Rivian R1T’s ascent up quite a steep snow-covered track, as captured in this video. Furthermore, the owner chose to go up said trail at night and he points out that it’s really the Rivian’s excellent off-road capabilities that gave him the confidence to tackle the hill without the added security of daylight.

What a Chad previously uploaded a video of him driving his electric truck up a different snowy road, and during the day, but the road in this new video (the one shot at night) actually looks a bit trickier. In the video shot in daytime, you can clearly see that what he’s driving on is an actual road, just one completely covered in snow, while in the second video, the surface is clearly a lot more uneven and it’s also narrower.

Chad doesn’t put the R1T in its highest suspension setting, opting for the ‘High’ not ‘Max’ height setting. That increases the ground clearance from the standard 11.4 inches to 13.1 inches. The lowest setting drops the R1T to 7.9 inches, while ‘Max’ takes it up to 14.9 inches, making most obstacles fairly easy to go over.

The R1T also relies on its impressive power and torque output to ensure steady progress in all conditions. It features four electric motors, one for each wheel, and this further enables it to send exactly as much power as is needed to a certain wheel, theoretically giving the vehicle comparable (if not better) obstacle-crossing ability than a traditional off-roader with locked differentials.