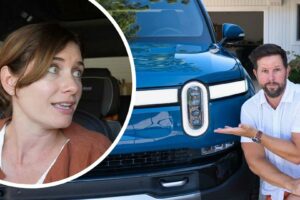 Ben Sullins just took delivery of his brand-new Rivian R1T electric truck a month ago. While he’s a seasoned EV owner who’s been known to do his homework, Ben admits that there was a lot he didn’t know about the electric pickup prior to spending some quality time with it. Needless to say, he’s learned quite a bit over the course of a month, and now it’s time to share it.

Rather than providing a traditional review of the electric truck, which Ben has already shared, the video above covers the lessons he’s learned since taking delivery. He reveals plenty of information that many people may be completely unaware of, which isn’t the case with many of the Rivian R1T videos we’ve watched lately.

Ben says due to California’s time-of-use electricity rates and the R1T’s massive battery pack, charging every night makes a lot of sense, and it’s smart to do so during the small window when energy is cheaper. To take advantage of the cheapest electricity rates and get the R1T’s large pack fully charged during the off-peak time, he says a hard-wired 48-amp Level 2 charging station is necessary.

As far as performance is concerned, Ben is impressed overall, though he says that since the truck accelerates so rapidly and there’s no low regen setting, it really takes some getting used to. He suggests that people coming from a gas truck may be really taken by surprise.

Ben goes on to share that the R1T’s driver-assistance technology is quite impressive. Rivian isn’t trying to make the car drive itself, but rather, to make driving easier and less stressful. He says it works well, which some may not expect since the automaker doesn’t really have any prior experience in the field or any previous data to rely on.

The R1T’s interior is both roomy and upscale, which makes it a solid choice for families. Ben says that Volvo is the only automaker that comes to mind when he’s looking at the Rivian’s interior design and quality.

Ben says the R1T’s frunk is large and useful, but items can tend to shift around a lot, and the cargo net that comes with the truck is not very helpful since it’s too tight. He also adds that the gear tunnel is very useful, and he actually uses it all the time, though he’s had some issues with it not opening as it should.

He goes on to talk about some weirdness with the Rivian’s air suspension when you stop or park the truck, the under-bed storage compartment, misalignment with the power-retractable tonneau cover, and the lack of a rear bumper, among many other interesting topics.

Check out the video for much more from Ben about the Rivian R1T. We can honestly say that this is one of the first videos about the R1T that actually shed light on many things we were completely unaware of. Kudos to Ben for revealing all the new details.