Home » Car Reviews » Rivian R1T First Impressions And Test Drive: Is It For You?

Rivian R1T First Impressions And Test Drive: Is It For You? 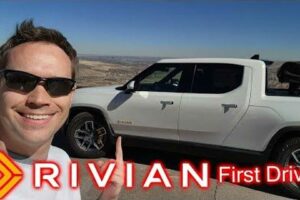 Tesla owners and YouTube influencers Erik and David (DAErik) finally got some quality time with the all-new Rivian R1T, the first fully electric pickup truck to begin deliveries on our shores. Needless to say, the truck didn’t disappoint. In fact, they tweeted that the R1T will officially become their first non-Tesla EV.

Sure, Rivian is struggling. Anyone who expected anything different probably hasn’t been keeping their eyes on Tesla over the years (or the host of other EV startups that never made it). It’s a little bit like history repeating itself. Rivian can’t make enough vehicles, it can’t make money, it’s making weird decisions that negatively impact its future owners, then changing its mind, and the list goes on and on.

Not only did Rivian successfully launch the first electric truck in the States, but it did so in the midst of a global pandemic, an economic catastrophe riddled by crazy inflation, and a semiconductor chip and automotive supply shortage. The situation has been tough, and the headlines are negative. However, when it comes to the truck itself, Rivian has already won.

Sadly, Erik and David only got to spend a few hours alone with the R1T, but it was enough to convince them that the Rivian is worthy of being their next vehicle. They already went so far as to cancel their previous orders for a Kia EV6 and Ford F-150 Lightning.

It arguably comes as no surprise they canceled the Kia order. The EV6 is also a fantastic EV in so many ways, but it’s nothing like the R1T when it comes to capability. On the flip side, it’s interesting that they canceled the Lightning reservation, but it just goes to show that the R1T really wowed them.

Our own Kyle Conner is spending loads of time with the R1T and cranking out videos for his various channels. We wouldn’t be surprised in the least if he ends up with an R1T as well. In fact, we’re here to tell you, he wholeheartedly agrees with Erik and all the other folks who are praising this electric pickup. It’s honestly about as perfect a new vehicle as anyone could ever hope for, and for almost every reason.

The R1T has already proven to be one of the most capable vehicles we’ve seen in years, yet it’s also a premium family-hauler with spacious seats, loads of cargo capacity, and many unique features.

Erik and David were impressed with the R1T’s infotainment technology, the automatic retractable tonneau cover, the built-in air compressor, the large frunk, the under-seat storage, and, of course, the innovative gear tunnel, which is accessible from inside the cabin. The guys also got to check out the available tent for the R1T. The video takes us on a tour of all the unique features and provides some quick driving impressions.

What do you think of the Rivian R1T? Perhaps more importantly, will Rivian make it through the mess and move on to become a successful company as a whole? If so, how long might it take? Knowing the situation Rivian is in, would you keep your R1T order over order for the F-150 Lightning?