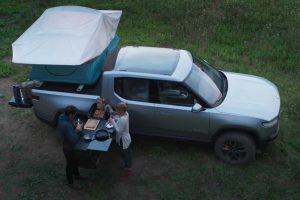 Rivian is certainly making sure it has adequate funds and support for a successful electric vehicle launch.

Some say Rivian is poised to be the next Tesla. Perhaps it will eventually go public and see massive stock gains. However, for now, Rivian hasn’t gone that route. Instead, it has been aggressively raising funds, and it has significant financial support from the likes of Amazon, Ford, T. Rowe Price, and many other companies and investors.

Rivian just finished its first investment round of 2021, grabbing up about $2.65 billion. The electric pickup truck maker’s total valuation now comes in at a whopping $27.6 billion ahead of the planned launch of its first vehicles this summer.

“We have been eagerly anticipating the arrival of 2021, and with it, the exhilaration of Rivian starting to deliver its revolutionary products to customers. It is invigorating for us to continue our journey with such a talented, mission-driven team building a robust organization for the long term.”

Rivian will officially launch its R1T all-electric pickup truck as early as June 2021, followed by its R1S electric three-row SUV. Both vehicles feature luxury-grade cabins, loads of range, unparalleled performance, and unique options. The automaker says it will also launch its Amazon electric delivery vans before the close of the year.

Rivian is marketing its future lineup as “Electric Adventure Vehicles.” Not only has it shown that these EVs are highly capable on and off the pavement, but also that they’ll offer all sorts of special options, equipment, and features for Overlanding expeditions.

Rivian says its recent investment round was led by Amazon’s Climate Pledge Fund, Coatue, D1 Capital Partners, and Fidelity Management and Research Company. However, other existing investors, as well as new investors, were also along for the ride. Rivian founder and CEO RJ Scaringe shared:

“This is a critical year for us as we are launching the R1T, the R1S, and the Amazon commercial delivery vehicles. The support and confidence of our investors enables us to remain focused on these launches while simultaneously scaling our business for our next stage of growth.”

Does Rivian have what it takes to make it? Will it be the next Tesla? How soon, if ever, until Rivian decides to go public? Start a conversation in our comment section below.