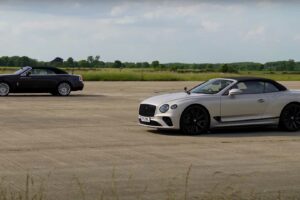 When it comes to luxurious convertibles with massive 12-cylinder engines inside the bonnet, there’s a tight matchup coming from the United Kingdom. We’re talking about the Rolls-Royce Dawn and the Bentley Continental GTC Speed – and they’re up for a drag race, courtesy of Carwow.

If you’re in the market for these cars, knowing which one’s quicker isn’t exactly a selling point. They aren’t built for speed but rather for motoring in extreme opulence. But that doesn’t mean that these heavyweights are a slacker as put their spec sheets side-by-side for comparison.

Sitting atop the recently introduced Bentley Continental GTC S, the Continental GTC Speed is that range-topper. It’s powered by a twin-turbo 6.0-liter W12 engine that puts out 650 horsepower (485 kilowatts) and 664 pound-feet (900 Newton-meters) of torque.

Meanwhile, the Rolls-Royce Dawn makes use of a BMW-sourced twin-turbo 6.6-liter V12 for an output of 563 hp (420 kW) and 605 lb-ft (820 Nm) of pulling power. Both land yachts send these numbers to the wheels via an 8-speed automatic gearbox, with the Bentley using a DCT instead of a conventional torque converter.

While these numbers are massive, let’s remember that both cars come with lots of leather, wood, and other luxurious features that make them colossal in terms of weight. That said, the Continental GTC Speed is lighter than the Dawn by 273 pounds (124 kilograms), which should matter given the difference in power outputs between these heavy machines.

Does the Rolls-Royce Dawn’s disadvantage in output and weight automatically hand over the win to the Continental GTC Speed? The video atop this page should settle the score, including a “roof race” that the Bentley won. As always, let us know your thoughts in the comments section below.