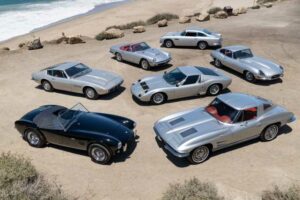 His Silver Surfer collection includes a rare Shelby, Maseratis, and a million-dollar Miura.

If you don’t know Neil Peart, you probably know the band Rush. You’ve almost certainly heard Peart’s virtuosic drumming in songs like The Spirit of Radio or the 1981 classic Tom Sawyer. There are great drummers, and on a completely different level from them all, there’s Peart. He lost a lengthy battle with cancer in 2020, but his memory endures in the music he created, and his passion for cars. Specifically, silver cars.

His special collection will grace the fine fields of Pebble Beach in August, where several extraordinary cars will cross the auction block on August 13 and 14 through Gooding & Company. Peart named his collection the Silver Surfers for obvious reasons, and it’s an enviable collection of epic classics in every sense of the word. Here’s a quick look at the cars and estimates on what they might bring, going from lowest to highest. Of course, the rock star factor is always hard to quantify in such situations.

The only year for the rear split window on the ‘Vette, this car is listed as having the 340-horsepower (254-kilowatt) version of the 327 cubic-inch V8. A four-speed manual puts power to the ground, and the car is said to have had an extensive restoration before Peart bought it in 2011.

The first of two Maserati’s in Peart’s Silver Surfer group, this Ghibli is one of 425 built according to the auction listing. It has a tan interior, it rides on Campagnolo center-lock wheels, and Peart acquired the car in 2013.

Maserati number two is a bit more valuable and arguably a bit easier on the eyes. Per the listing, it’s one of just 125 Mistral Spiders built and this one is chassis AM109/S*049*. It was fully restored while in Peart’s care.

According to Gooding & Company, this is the classic car that fueled Peart’s automotive passion since he was a boy. It’s also the first one he purchased, and this particular DB5 is chassis DB5/1690/R. The greenhouse is finished in navy blue leather and features a ZF five-speed transmission, sending power to Borrani wire wheels at the back.

Not all cars in the Silver Surfer collection are silver. This original, early Cobra predates the big-block 427 run, featuring a Ford 289 cubic-inch V8 beneath the black exterior. Fully restored in the mid-2000s, Peart bought the car in 2015 and it could break the million-dollar barrier when it crosses the block in August.

There’s no question the Miura is the star of this show. This particular car is listed as chassis 4042 and sports a black interior to accent the abundance of silver.