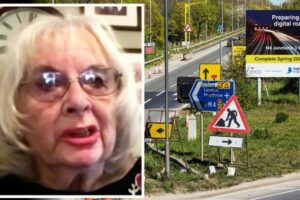 Smart motorways: Sally Jacobs opens up on death of her husband

Speaking on Good Morning Britain, widow Sally Jacobs said drivers had just “seconds to get to safety” on the dangerous roads. She hit back at the DfT’s stopped vehicle detection technology which she claims would have made no difference in her husband’s accident.

Mr Madeley said: “How long was it before the tyre burst and his car was hit by the van and he was killed. What was the gap?”

She replied: “It would have been seconds.

“That’s why the cameras are irrelevant whether they are working or not.

“You have seconds to get to safety with traffic thundering down behind you.

“It doesn’t matter if the cameras work or not, It’s ridiculous.”

She added: “It wouldn’t have mattered at all.

“The police said to me he did nothing wrong.

“He did it all by the book and still he was killed. It’s just terrible.”

Mr Madeley also believes cameras would have made not a “blind bit of difference” in the accident.

He said: “So many people have been trying to get this across to the Government and the Department of Transport.

“They can go on all they like about these cameras; ’we’ll get them working, we’ll get full coverage, it’ll be fine’.

“You look at what happened to Derek, there could have been 50 cameras on that scene it would have made not a blind bit of difference.”