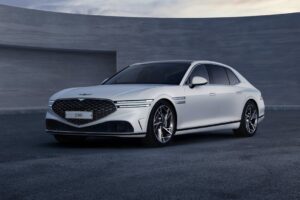 Genesis has confirmed specifications for its new G90, the brand’s range-topping luxury saloon set to take on the Mercedes S-Class.

The Korean premium brand’s range-topping four-door is powered by a 375bhp 3.5-litre turbocharged petrol engine in standard wheelbase form, while in the long wheelbase model the 3.5-litre unit is supplemented by an electric compressor powered by the G90’s 48-volt mild hybrid system.

Genesis hasn’t confirmed a power output for the unit assisted by its electric supercharger, but unlike the rear-drive-only standard wheelbase car, the long wheelbase model’s eight-speed automatic gearbox sends power to all four wheels.

The regular G90 offers Genesis’s Preview-Electronic Control Suspension, a system that scans the road ahead of the car and uses data from the sat-nav to adjust the suspension dampers according to the road for maximum comfort. This adaptive tech features on the air-sprung set-up, too.

According to genesis, if the technology senses a hump in the road 100m ahead, it raises the car’s ride height by 10mm and optimises the suspension settings to reduce the jolt to passengers; on rough roads the system can raise the suspension by as much as 25mm at both the front and the rear to avoid the body contacting the ground over harsher bumps.

There’s also a Brake Mode function with a ‘Chauffeur’ setting – one of three modes that adjusts the parameters of the braking system depending on driver preference.

Continuing the focus on refinement, Genesis has equipped the G90 with active noise cancellation tech. This picks up frequencies from road noise and sends signals to the car’s speakers to cancel this out. It’s helped by laminated glass.

Other tech includes flush door handles, keyless entry vid Genesis’s Digital Key 2 and a fingerprint recognition system to start the car, which also pre-loads specific driver settings that have been previously assigned to that fingerprint.

An easy-close system for the doors allows them to be closed at the push of a button so driver and passengers don’t have to reach out and pull them shut; the driver’s door can also be set to shut automatically when the brake pedal is depressed.

Genesis has not yet revealed full details of the G90’s infotainment system but has confirmed it will be compatible with over-the-air updates. The navigation system, digital cluster, Head-Up-display (HUD), brakes, steering wheel, suspension, airbags, and driver assistance tech are all compatible with upgrades via a remote data connection.

The G90 has been designed with a focus on rear-seat comfort. Features include air bolsters in the seats that deflate to allow easier entry and exit, as well as leg and foot rests behind the front passenger seat.

The car’s 10.2-inch rear screens can adjust their angle in accordance with the rear seat positions for easier viewing, while a centrally mounted eight-inch touchscreen in the armrest controls the climate and massage functions.

Described as “the most elegant interpretation of the brand’s design philosophy of Athletic Elegance yet” by the Hyundai Group’s premium brand, the Genesis G90 combines many design features seen on its most recent models, such a the smaller G80 saloon and GV80 SUV.

These include the prominent ‘Crest’ grille and horizontal two-line headlamps, which stretch outwards from the grille and link back over the car’s front wings. The lights themselves are the slimmest offered on any Genesis model, neatly combining both daytime running lights and low beams by using Micro Lens Array (MLA) technology. Even the car’s indicators stretch around the entire front end.

Efforts to “create a sleek impression” include a clamshell bonnet, which stretches over the wings to eliminate panel gaps, and a “Guilloché pattern-applied Genesis bonnet logo”, said to be 80 per cent thinner than previous bonnet emblems from the brand.

Like other Genesis models, the G90 uses a ’Parabolic Line’ design approach down the sides of the car, with an “elegantly unbroken” line flowing from the bonnet, along the bottom of the window and onto the boot lid. The relatively low side window line contrasts with thick C-pillars, which Genesis says was done to give rear passengers “both an open atmosphere and privacy at the same time”.

The rear is equally angular, with a sloping roof and boot line combining with a full-width light bar that sits over the Genesis name spread across the rear. Below that sits a large, unbroken chrome strip and wide twin exhaust tailpipes.

Genesis has yet to detail much of the BMW 7 Series rival’s technical set-up, nor has it shown the interior. But we do know that the G90 will be available in both standard and long-wheelbase form, with the latter adding a further 190mm into its wheelbase, as well as exclusive 20-inch wheels.

The new G90 will succeed the current-generation model, which has been offered in other global markets such as the US since 2015. Prototypes have previously been spotted testing at places such as the Nurburgring in Germany, but Genesis claims it is “not currently scheduled to be on sale in Europe”. Instead, it provides “clear intent in the premium market”, and will be offered in selected countries only as a halo model.

“The new G90 will redefine the luxury design experience in a unique way only offered by Genesis,” claims the firm’s global design boss, SangYup Lee. “The G90 is the ultimate expression of Athletic Elegance that carefully balances dynamic driving and an elegant rear-seat experience”.