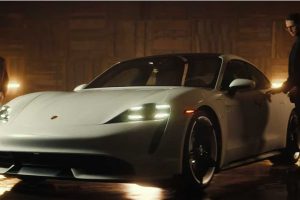 You won’t see this during the big game, and that’s a shame.

We loved GM’s EV Super Bowl ad starring Will Farrell, and also Ford’s and Audi’s response ads. However, we came across this Porsche-spec ad made by Valkyr Productions in the Porsche Taycan Facebook Group, and it’s every bit as clever and as well done as the real Super Bowl spots.

The two and a half minute ad explores the plight of Mr. E, and how he’s misunderstood and a bit of a lost soul until he finds the Porsche Taycan. The Taycan invigorates Mr. E and gives him purpose again.

The brilliantly-done spec-ad was actually inspired by the 2007 ad in which “Mr. W” was introduced. Similarly misunderstood and underappreciated, Mr. W found his peace when was introduced to a renewable wind energy company, and his potential was finally realized. The ad was made for the Australian company Epuron with French actor Guillaume Delaunay playing Mr. Wind.

The 2007 commercial featuring Mr. W was the inspiration for the Mr. E character.

The Valkyr website asks “Lightning aside, it’s really only been around since the lightbulb in the late 1800s and although it’s enabled our radios, televisions, fans and countless other devices since then, it’s impossible to see otherwise. If electricity were a person, how would that make them feel, to be so overlooked and under-appreciated?”

Alone and underappreciated, until Porsche creates the Taycan, we suppose. Valkyr Productions made this ad on spec, with the hope that Porsche likes the direction it’s going in and decides to use the Mr. E character line for a future contract. We think this was brilliantly done and hope Porsche agrees, so we get to see more of the adventures of Mr. E.

So check out the video and let us know what you think. Should Porsche engage Valkyr Productions and continue with the adventures of Mr. E? As always, let us know your thoughts in the comment section below.