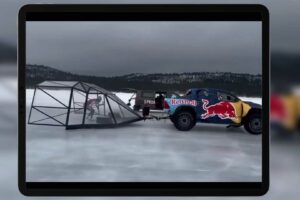 Wind resistance is a necessary evil. We can’t really get rid of the air, but we can lessen its effect on things. That’s what 32-year-old Dutch speed skater and Olympic champion Kjeld Nuis did, using a Dakar Rally truck to pull a wind catcher behind it so he could set a new speed skating record. He hit 62 miles per hour (103 kilometers per hour) on Norway’s Savalen Lake.

Piloting the Dakar Rally truck was 19-year-old Seth Quintero, who “couldn’t imagine anyone achieving that kind of speed with their own legs.” He found accelerating in the correct way was one of the biggest challenges to the whole event, adding that he’s “never felt so much tension at such a low speed.”

Sixty-four mph might seem low in a Dakar Rally truck, but that number is quite impressive in the speed skating world. It’s six mph (10 kph) more than the speed he achieved four years ago, with the 62-mph (100-kph) barrier gnawing at him after the previous attempt.

Nuis pushed himself to break the barrier. “It was very hard on my body,” he said, adding that 64 mph “is really the maximum that is possible on skates.” Nuis said that during the attempt, “every little bump felt like a threshold. Sometimes I even got really loose from the ice.” Skating at these speeds takes precision, he added.

The rally truck pulled a wind catcher behind it that partially encapsulated Nuis, reducing his exposure to wind resistance, which helped him break that barrier. Nuis didn’t have to convert his energy into fighting the wind, using it to reach a higher speed. Nuis had to skate for more than two kilometers during each attempt, which is longer than what is required in a speed skating competition.

Eliminating or reducing wind resistance is an excellent way to hit a faster speed, and it’s a regularly used tactic in racing. If Nuis is correct, his 62-mph record could be unbreakable, but we doubt that will stop anyone from attempting to break it in the future. Better skates or some other creative thinking could give another skater the edge in the future, or maybe Nuis will make a habit of breaking his own records.