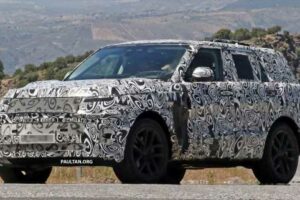 The third-generation successor to the current model has been tipped to use Jaguar Land Rover’s future MLA Flex architecture, which has been designed primarily with electric propulsion in mind. This will support electrified internal combustion as well as pure battery-electric powertrains, and will first debut on the full-sized Range Rover.

As for the forthcoming Range Rover Sport itself, its exterior appears to be a relatively mild evolution of the L494-generation vehicle, though likely with shorter overhangs front and rear. Though with plenty of camouflage on the vehicle that is still early in its development stages, some of its shapes suggest a more Velar-like look with slimmer headlamps as well as horizontally oriented tail lamps. With the aforementioned MLA Flex platform that will support the use of ICE, hybrid and fully electric powertrains, the recently introduced 3.0 litre mild-hybrid Ingenium diesel and the PHEV 2.0 litre four-cylinder petrol engines could serve in the third-generation Range Rover Sport.

In terms of electric drive, this will likely come in the form of systems that Jaguar Land Rover is co-developing with BMW. These will centre around the fifth-generation (or Gen 5) BMW eDrive technology, which has made its debut in the BMW iX3.

So far, the next-generation Range Rover Sport has been tipped to make its official debut towards the end of 2022 as a 2023 model, after its full-sized, big brother Range Rover has made its premiere.