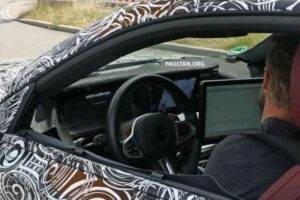 With the G42 BMW 2 Series Coupé having made its debut, the M2 is set to follow suit as the high-performance rear-wheel drive two-door has been sighted running tests on the public road. Our spy photographer source has also managed to get up close for some images of its interior.

Inside, the G87 M2 development unit shows a freestanding, slightly curved dual screen arrangement that is slightly larger than on the regular 2 Series range, incorporating the driver instrumentation and the infotainment screen in the M2 rather than the separate units in the 2 Series Coupé where the driver’s instrument panel has its own shroud.

Here, the M2 steering wheel appears to be largely the same as that of the M240i, with the addition of ‘M1’ and ‘M2’ buttons for customised presets as on the latest M cars such as the G80 M3 and G82 M4.

As for the exterior, the full-on M2 naturally gets augmented bodywork where the wheelarches are enlarged over those of the regular G42 to house wheels and tyres that will place a larger contact patch on the road, along with the obligatory ‘power dome’ on the bonnet.

A visible shift paddle on the steering wheel in the included images indicate this is an automatic transmission installed in this development car, though earlier reports say the G87 M2 will also come with a six-speed manual gearbox, and both versions will feature an Active M differential on the rear axle.

BMW has reportedly been considering an eight-speed torque converter automatic in place of the outgoing car’s seven-speed DCT, which would makes sense as the engine it shares with the M3 and M4 are also paired with the eight-speed M Steptronic automatic.

The latest on the grapevine, according to our sources, is that the G87 M2 will pack up to 490 hp from the turbocharged inline-six engine that powers the M3 and M4. That upper limit could be referring to the eventual Competition and CS variants that will surface later on in the M2’s lifecycle, though to begin with, the M2 has previously been said to debut with around 400 hp.