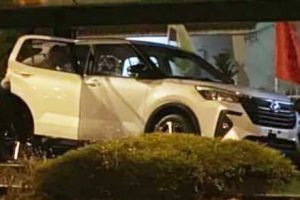 The Perodua Ativa (or D55L) has been spotted completely undisguised ahead of its official launch on March 3 thanks to RiderAth, who spotted several units of the compact B-segment SUV being transported on a trailer recently.

These images give us a good look at the design of the Ativa (unlike previous camouflaged units), which isn’t a direct copy of the Daihatsu Rocky it is based on. While the overall profile is pretty much identical, the Perodua SUV gets distinctive front and rear sections.

Starting with the former, the grille on the Ativa is stretched out to link the headlamps, with the Perodua logo framed by chrome slats. There’s also a different bumper with triangular fog lamp enclosures that are accentuated by L-shaped trim pieces.

The rear also gets a different bumper to the Rocky, with fog lamp/reflector sections that trail to the edges. Elsewhere, contrasting silver trim underlines the number plate holder, while the bridge that links the taillights, which is also where the tailgate release is located, is finished in chrome. No shots of the interior for now, but from early impressions, the DNGA-based Ativa will have a cabin similar to the Rocky, but with an air-conditioning control panel that is specific to the Perodua model, with a memory function like in the Myvi.

Drive will be sent to the front wheels through a new D-CVT that promises increased transmission efficiency and quietness over a conventional CVT. The transmission will also feature a new sequential shift mode with seven virtual ratios, while a Power button on the steering wheel remaps the engine and gearbox for quicker response. If you’re curious how this setup feels on the move, Danny Tan’s got you covered.

Estimated pricing for the Ativa starts at RM62,500 on-the-road without insurance, and goes all the way up to RM73,400. That places it in close proximity with the larger Aruz that comes with seven seats, although the equipment advantage does make it a compelling case.

Now that you know about the technology that the Ativa will come with, as well as how it looks thanks to this latest sighting, are you impressed? Have you already placed a booking? Share your thoughts in the comments below.

Our coverage of the 2021 Perodua Ativa D55L SUV