Study Ranks Jeep As The Most Patriotic Brand In America 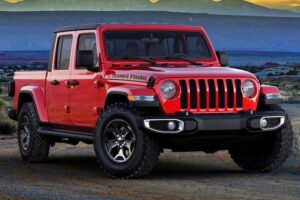 There’s no denying that Detroit-based brands under the Stellantis umbrella – namely Ram, Dodge, and Jeep – love to tug at patriotic American heartstrings. With Dodge hellcatting all its models, the burnout brand may as well sell apple pies with each new vehicle. Ram has its Built To Serve Edition pickups that literally have American flags on the bed. But in the latest Brand Keys survey, it’s Jeep that people find the most patriotic brand of all.

Mind you, this ranking isn’t just about the automotive sector. The annual Brand Keys patriotic survey is all-inclusive for pretty much everything in the for-profit sector, from retail chains to online services, television networks, sports, you name it. To give you a taste of this, the brands underneath Jeep include, Walmart at number two, Disney in third, Ford and Amazon tied for fourth, and The New York Times in the number five spot. Focusing on the motoring sector, Harley-Davidson placed 14th and Tesla just made the cut in 30th spot, tied with Zoom. No other automotive-related companies appear on the list.

The survey sampled 5,804 consumers ranging in age from 16 to 65. Brand Keys says the survey group was balanced with regards to gender and political affiliation, and they were drawn from the nine US Census Regions spanning the United States. 1,172 different brands were part of the survey, with 50 ultimately chosen as the most patriotic. The list only includes 30 positions because many brands are tied in rankings.

“The state of the world and the marketplace have changed basic tenets of consumer loyalty and perceptions of patriotism, generally and within the context of brands,” said Brand Keys President Robert Passikoff. “Movement of brands up and down the annual list have been comparatively modest.”

While the movement of brands on the list is common, Brand Keys says Jeep has consistently remained number one since the very first study was released in 2003.