Study Shows Which Vehicles Have Highest Dealer Markups In Each State 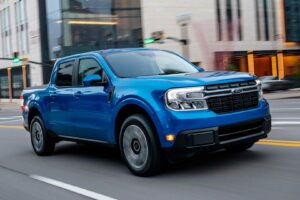 According to recent market research by iSeeCars, which looked at over 1.2 million new car listings in the US, the average new car price in the country is 9.9 percent more than the MSRP.

Some vehicles sell way more than that percentage. These are led by the Jeep Wrangler and the Ford Maverick – both selling 25 percent over MSRP on average. In some states, though, the markup is even bigger.

The iSeeCars study has the complete list of states and the car that has the highest markup in each one.

Though the price above the MSRP of the Ford Maverick is less than that of the Wrangler, the markup in relation to the MSRP is greater. Pennsylvania shows the highest markup of all, showing 34.7 percent for the Ford compact truck.

Low new car inventory caused by production shutdowns and supply chain issues is the cited culprit for this discrepancy in pricing.