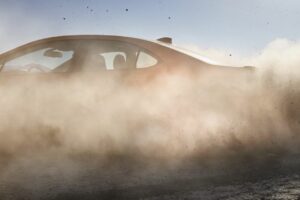 Earlier this month, it was announced that this year’s New York International Auto Show (NYIAS) would be cancelled due to the rising number of Covid-19 cases (the same thing happened last year) involving the more contagious Delta variant. This has left some automakers with a bit of a problem, as all their efforts in preparing grand launches for new models appear to have been for nothing.

One such automaker is Subaru, who originally planned to introduce two significant models, including the 2022 WRX and Forester Wilderness at the event. Both cars have been teased in the weeks prior to the NYIAS, but they have now been put on hold, with no confirmation of when the public will get to see them.

“We have not confirmed when information about the WRX or the next Wilderness model will be released due to the cancellation of NYIAS,” a Subaru spokesperson told Carscoops. Of the two models that were scheduled to debut on August 19, the WRX is the one that attracted the most buzz. Styled with cues that are reminiscent of those found on the Viziv Performance Concept from 2017, the performance sedan is expected to adopt a more capable FA24F 2.4 litre turbocharged flat-four engine that is also used in the Ascent, Outback and Legacy.

Meanwhile, the Forester will be the second model in Subaru’s Wilderness range after the Outback, and will benefit from enhancements to make it even more capable off-road. Based on what’s been teased, the Forester Wilderness will boast a taller ride height, chunky tyres and design changes to reflect its rugged persona.

Even though there will be no on-stage debuts at the cancelled NYIAS, Subaru could go with a virtual launch instead, which has become common practice during the pandemic-hit times we live in. However, we’ll have to wait and see what’s the new date that Subaru picks to introduce the new WRX and Forester Wilderness.