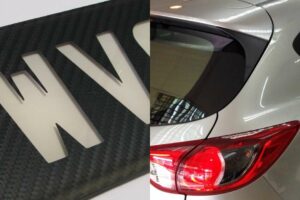 Driving around with non-compliant vehicle number plates and tinted windows above permissible levels? Chances are, you’re likely from the T20 income group, says the Centre for Governance and Political Studies (Cent-GPS).

The Kuala Lumpur-based behavioral and social science research firm said this was what it observed following a study it conducted to determine which type of cars were most likely to violate rules set by the road transport department (JPJ).

Posting its findings on a series of tweets on Twitter, the firm said the study was conducted in May, when it deployed observation teams across multiple KL entry locations during the rush-hour period on work days. Monitoring vehicles moving into KL during congestion, the stationary teams observed a total of 1,256 unlawful vehicles. 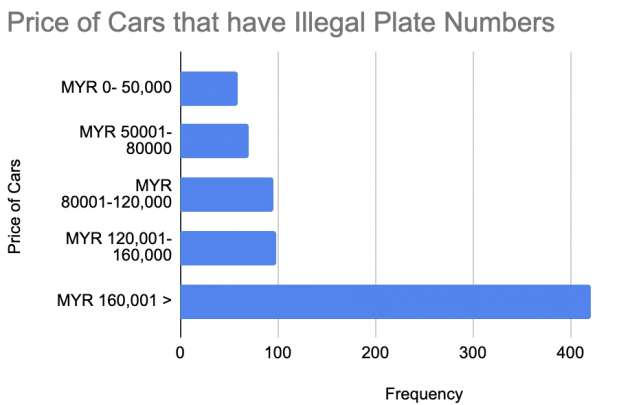 It estimated that 58.8% of cars with illegal number plates belonged to the T20 group, while 25.6% belonged to the M40 group and 15.9% came from the B40 group, determining the owners’ income group based on new vehicle prices. The company added it assumed that every car it observed was purchased through a bank loan, with a five-year repayment plan and no down payment.

The firm also stated that the experiment did not observe motorcycles, which meant it couldn’t conclusively determine if the T20 group was more likely to break JPJ rules for number plates.

The Cent-GPS team also broke down the data in terms of vehicle origins. Asian makes (Toyota, Honda, Lexus, etc) made up 51% of the total, while Continental brands (Mercedes, Audi, BMW, etc) made up 33.4% of the miscreants. Malaysian makes only made up 15.6% of the unlawful lot, though the firm stated that many of these were Proton X70s.

As for vehicle windows tinted well above permissible levels (for the front side windows, for which a 50% visible light transmission (VLT) rate is the legal limit), the study found that the T20 brigade led things once again, estimating that 52.8% of cars with illegally tinted windows it observed were worth more than RM160,000.

Cent-GPS did acknowledge that it did not have the proper equipment to measure tint levels and only recorded cars with fully black tinted windows on the driver’s side, and said this limitation could be improved on in future studies. 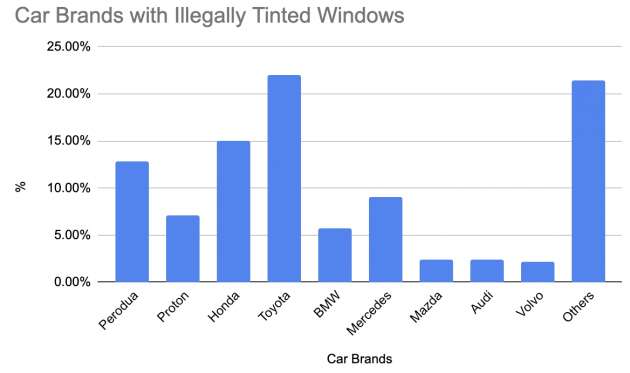 However, based on general findings, it stated that cars over RM160,000 clearly dominated both categories, and asked why “society treats the ‘seemingly rich’ with more privileges, allowing them to think they can get away with violations of the law.”

It added that the findings also begs the question on the country’s policy-making and rule of law. “If something as simple as car plate number laws are not being obeyed by certain segments of our country, how are we going to enforce more complex laws in the future?” the firm asked.