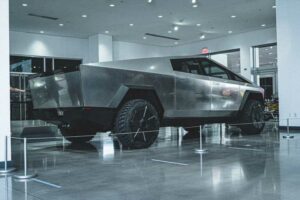 It seems the Tesla Cybertruck prototype has morphed again, a trend that’s logically going to continue right up until the day when all the stars align and Tesla parades around a finalized design—if and when that time ever comes. Unlike the Ford F-150 Lightning, which is set for production in Spring 2022, the Cybertruck is not headed to production anytime soon. There’s a chance that both GM with its Silverado EV and Ram with an EV truck could beat it to market. That is, of course, assuming the Cybertruck is not just vaporware.

Regardless, as reported on the Cybertruck Owners Club forum, the Cybertruck prototype has been spotted sporting some design changes that have the CT fans all fired up. The thread is based on YouTube drone footage of the Cybertruck doing some track testing during “Tesla Cyber Day” in Fremont, California. Forum members found the following changes; check out the pictures posted in the thread to see if you agree.

We’ve noticed this before, but the new prototype has slightly different proportions. It seems the front end is shorter and to some, the top of the cabin looks smaller. It also looks narrower in the front than rear.

The windshield has curved glass, breaking up the otherwise very angular lines of the Cybertruck. It kind of looks unfinished and awkward where it meets the roofline. Can you imagine having to replace this giant windshield?

There’s a single, giant windshield wiper on the driver side. It just may be the world’s biggest windshield wiper. It’s definitely not the once-promised laser wiper. (Whatever it is, Elon Musk claim’s it’s not the production wiper.)

Looking through the windshield, some spotted a depressed storage area in the dash. Shaved door handles, the cool truck mod of 20 years ago, are back. The side panels of the Cybertruck are smooth as butter, thanks to a lack of door handles. It’s not that they retract—there aren’t any. At all. That’s fun, but will we realistically see the return of door handles in the next iterations? It’s likely. We also get a better look at the side mirrors, spotted last time, which remain.

Lastly, the charge port door flap has perhaps been moved into the fender flare, whereas before it butted up against the flare. Cheaper to put it in the flare than in a body panel? Some spotted what may be running boards.

Love it? Hate it?