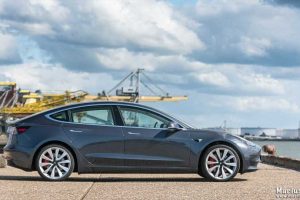 Electric cars produced by Tesla and GM are poised to get much more affordable.

According to new information related to a bill from the Biden Administration, Tesla and General Motors will benefit in a big way. If the bill passes, and it’s expected to since the Senate now has a Democratic majority, the two automakers would be able to sell 400,000 more EVs that are eligible for a federal tax credit, though the credit would be $7,000 rather than $7,500.

The bill in question is the Growing Renewable Energy and Efficiency Now (GREEN) Act. It not only features a renewed and updated EV tax credit, but also other programs and incentives related to renewable energy.

The GREEN Act raises the EV tax credit cap to 600,000 vehicles. However, after a company sells 200,000 EVs, the maximum credit is reduced sightly, to $7,000. GM and Tesla have already sold 200,000 EVs in the U.S., which means these automaker electric cars no longer qualify for the credit under the current rules. The GREEN Act’s specifics related to the credit are as follows:

“At the start of the new phaseout period created under the bill, the credit is reduced by 50 percent for one calendar quarter and subsequently ends. For manufacturers that already passed the 200,000 threshold before the enactment of the bill, the number of vehicles sold in between 200,000 and those sold on the date of enactment are excluded in determining when the 600,000 threshold is reached.”

This is s developing story. We’ll be adding additional information as we learn more.