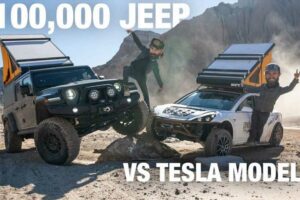 When we first stumbled upon the video above, which was produced and published by YouTube channel Grind Hard Plumbing Co, we wondered why anyone would choose a Tesla Model 3 as an off-road rival to the purpose-built and ncredibly capable Jeep Gladiator.

The team over at Grind Hard Plumbing Co – a YouTube channel that may deserve an award for its interesting name, not to mention its unique content – says it’s a group of “a couple of friends who build crazy cars and contraptions out of a small garage in the woods of North Idaho.”

As the story goes, Grind Hard owns a custom-modified Tesla Model 3 that was previously totaled. The group of friends worked to turn it into an impressive Overlander, though it’s arguably no Jeep no matter what mods it features. Grind hard writes:

“Today we do the Mojave road with a custom modified previously totaled tesla model 3 and compare it to a fully built $100,000 Jeep Gladiator overland machine. Will the Tesla survive the rock obstacles and deep water crossing? Find out here! This Might just be an Off roading fail.”

As you can see, they took the Model 3, along with the “fully built” $100,000 Jeep Gladiator out to the Mojave Desert to run one of the most unique and interesting battles we’ve seen to date. They took an “unbiased” observer along to help decide which vehicle fared better. In addition, Grind Hard invited a photographer from Car and Driver to document the trip. The photographer plans to cover the trip in an article that will eventually be published by Car and Driver.

The Mojave Trail is comprised of 140 miles of bumpy dirt tracks, numerous rock obstacles, and significantly deep water crossings. It’s a Jeep owner’s paradise, though certainly not for the faint of heart. With that said, there are really no words that can do this justice. You really have to watch it to take it all in. So, we’ll leave you to it.

Without completely spoiling it for you, we will tell you that the Model 3 gets knocked out of the competition early after getting filled with water.

While it performed quite well prior to the incident, Grind Hard couldn’t declare a winner since the Model 3 couldn’t complete all the challenges. Even if it had, there’s no question that the Gladiator is a tough act to follow in such conditions. Check it out and let us know what you think.