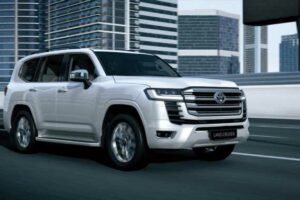 The 2022 toyota tundra and 2022 Toyota Land Cruiser may not look much alike, but thanks to modern R&D efficiencies, they’re practically the same below the cab. Close followers of industry trends, and Toyota in particular, know that automakers have been moving towards more platform sharing and consolidation in the past decade in an attempt to save money and reduce complexity. Unlike the 1980s, though, they’re doing it in ways that often don’t show up in the various vehicles.

In Toyota’s case, the company has been consolidating all its cars and SUVs onto different sizes of its Toyota New Global Architecture, or TNGA. Alternatively known as platforms and architectures, they’re best described as a common set of measurements and “hard points”— things like the location of the firewall, front and rear axles, track width, etc.—as well as shared components like engines, transmissions, wiring, etc. That way, engineers can put different tops on these platforms without having to engineer all those underlying parts from scratch.

In a first for Toyota, the company has undertaken the difficult task of moving its various large trucks and SUVs from around the world onto common platforms. The Tundra and Land Cruiser have thus been grouped together along with a third product Toyota engineers wouldn’t elaborate but is almost certainly the next-generation Sequoia. What makes this so hard is these three vehicles do very different jobs despite being similar in size and construction.

Engineers from North America, Japan, and elsewhere pulled it off, and that means the underpinnings of the new 2022 toyota tundra and Land Cruiser are essentially the same. Both now share a common “ladder” frame (with a cab or body bolted on top), built in different wheelbases (changing the distance between the front and rear axles) depending on the application.

Also shared is the same 3.4-liter twin-turbo V-6 and 10-speed automatic transmission, making all the mounting points on the frame the same. This means the Land Cruiser’s 3.3-liter twin-turbo diesel V-6 could be easily fitted to the Tundra if Toyota Motor North America wanted to, and the Tundra’s hybrid powertrain could easily be installed in the Land Cruiser if other markets wanted to do so (and they likely will as global emissions and fuel economy requirements tighten).

The Tundra and Land Cruiser also share most suspension parts and their overall design, with different tuning for each vehicle. That’s why the Land Cruiser has six-lug wheels now, as the Tundra needed them to increase its towing and hauling capabilities. And while Toyota engineers could have mounted leaf springs to the new frame for the Tundra to hold up the rear end, it uses coil springs and a five-link suspension like the Land Cruiser already had, resulting in better ride quality and significant cost savings. The front suspension uses the same control arm design on both trucks.

This also made it easier for the Tundra to pick up a number of off-road tools. The Land Cruiser already had a locking rear differential, Multi-Terrain Select off-road modes, and Crawl off-road cruise control, so now the Tundra has all of them, too. The Tundra does not, however, get the Land Cruiser’s Kinetic Dynamic Suspension System (KDSS), a set of automatically disconnecting front and rear anti-roll bars that improve wheel travel and suspension articulation off-road. While KDSS could be fitted to the Tundra, Toyota engineers didn’t see a need; KDSS is ideal for rock crawling situations that a pickup truck isn’t suited for in the first place.

Also not shared is the Land Cruiser’s full-time four-wheel drive system. While it’s necessary for the kinds of environments the Land Cruiser is designed for, it isn’t for typical Tundra duty and isn’t strong enough to handle the kind of towing the Tundra needs to do. Toyota engineers decided against offering a an automatic four-wheel drive mode as they didn’t see enough demand from customers to justify the cost of the larger, more expensive transfer case.