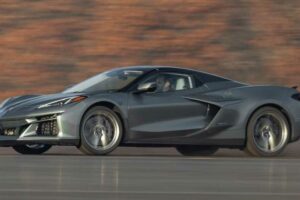 The ideal burnout machine has a powerful front-mounted engine sending a wallop of torque to the rear wheels, just like the C7 Corvette, built from 2014 to 2019. The new 2024 Chevrolet Corvette E-Ray hybrid , on the other hand, is specifically engineered to extinguish burnouts before they ever start. The E-Ray’s mid-mounted V-8 and the front-mounted electric motor team up through a hybrid-electric all-wheel-drive system that’s designed to reduce wheelspin and turn all 655 horsepower into blistering acceleration.

But Chevy hasn’t completely abandoned those of us who appreciate the finer things in life, such as a thundering small-block V-8 blaring the soundtrack for a star-spangled smoke show. If you push the buttons, pull the levers, and stand on the pedals in the right order, the E-Ray disables all-wheel drive and roasts its rear rubber.

The E-Ray’s burnout mode isn’t exactly an advertised feature, though the process will be familiar to some C8 Corvette Stingray and Z06 owners who can follow a similar sequence to warm their tires for the quickest possible launch-control start. Here’s how you do it: With traction and stability control disabled, you pull and hold both steering wheel shift paddles. Apply moderate pressure to the brake pedal with your left foot, then flatten the accelerator with your right. After the 6.2-liter V-8 stabilizes around 5,000 rpm, release both shift paddles. Maintain the brake pedal pressure while keeping the accelerator pinned and the car will calmly walk forward while the rear tires furiously spin.

As long as the brake pedal is pressed, the electric motor won’t send any torque to the front wheels, but you have to apply the just-right amount of brake pressure for the best possible burnout. With too little pressure, the 495-hp 6.2-liter V-8 will overpower the brakes and the E-Ray will rocket out of the hole. Push too hard, and the transmission controller will disconnect the eight-speed dual-clutch automatic from the engine to protect the driveline components being squeezed between the V-8’s 470 lb-ft of torque and the reaction force from the standard carbon-ceramic brakes.

A Quest for Better Burnouts

Even with Chevy’s workaround, you won’t be able to hold the tire-spinning E-Ray in one spot until the tread incinerates and the tire carcass self-destructs. There’s simply too much weight on top of too-grippy tires and too-grabby brakes at the rear of the ‘Vette to get the perfect ratio of front braking force to rear wheel slip.

Corvette chief engineer Josh Holder says that, while developing the 2020 Corvette Stingray, the team toyed with adding a line-lock system that would only apply the front brakes for better burnouts. They were foiled by the Corvette’s Michelin Pilot Sport 4S ZP summer tires. Those tires generate so much grip that they can push the car forward even with its front wheels fully locked—and not just a little bit. Holder says the Stingray accelerated at 0.4 g with its front tires sliding, or hard enough to hang with a Mazda Miata. He wasn’t joking. Every current-generation ND Miata that we’ve tested has averaged between 0.40 and 0.47 g in the 0-60-mph run.

E-Ray engineers similarly experimented with using the electric motor to send reverse torque to the front wheels during a burnout, thinking that its wider Z06-size tires might change the calculus, but they encountered the same problem. The front tires slide across the pavement rather than hold the E-Ray in place.

Despite the popularity of the cliché, no car can defy physics, which is why the E-Ray’s burnouts will never be as easy to execute or as dramatic to watch as those of a C7 Corvette or a V-8 Camaro. The Corvette E-Ray can send up enough smoke to put any nearby Eagle Scouts on edge, but if you’re looking to send smoke signals to the International Space Station, a mid-engine car will always be the wrong tool.