The Best-Selling Cars In The World In 2022 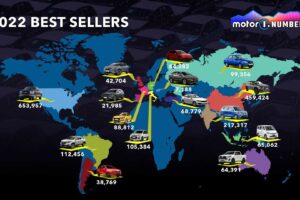 2022 is now in the books. It was a difficult year, marked by inflationary pressures around the world, the war in Ukraine and its effect on energy costs in Europe, and many other geopolitical tensions. Against this backdrop, the automotive industry recorded mixed results over the course of the year.

In this special edition of Motor1 Numbers, through a collaborative effort with the editorial staff of the global Motor1.com network, we have assembled the data on the best-selling cars in the world in 2022. Here are the results.

China, Healthy Thanks To Electric Vehicles

The situation in China, the world’s largest automotive market, is quite good considering the global challenges. Volume increased by 2 percent to 26.86 million units, compared to 2021. The figure was even better than in 2019, when the pandemic had not yet arrived.

It is the first time that this market nearly doubles the size of that in the US. Much of the growth has been driven by electric vehicles, heavily incentivized by the central government. According to preliminary data, these vehicles accounted for 20 percent of total sales, with the Wuling Hongguang Mini EV reaching the Top three best-selling models, along with the BYD Song Plus which totaled 459,424 units.

The second largest market was the US, which was more exposed to inflationary pressures and rising interest rates. Vehicle sales totaled 13.83 million units, down 8 percent from 2021 and the lowest level since 2012. Volume was 19 percent lower than in 2019.

Despite the negative results, consumers continued to shift from sedans and minivans to SUVs and pickup trucks, and Tesla continued to gain positions by placing two of its models at the top of the BEV chart. However, electric cars still account for a small fraction of the total, with Ford’s F-Series holding first place with 653,957 units, closely followed by the Chevrolet Silverado in second place (523,249 units) with the Ram pickup in third.

In Europe, the situation is no different than in America. Data for the top four markets (Germany, UK, France, Italy, and Spain), which account for around 75 percent of the entire region, indicate that the decline has not stopped.

In 2022, sales totaled 9.05 million units, down 6 percent from 2021. Volume was down 7 percent from the pandemic year (2020) and 29 percent from 2019. In Germany, Volkswagen triumphed once again with three cars positioned respectively in the top three places on the podium.

In France, Group Renault’s supremacy in the country was interrupted by a new first-place sales winner, the Peugeot 208 with 88,812 units sold.

In four years, the market has lost more than 3.7 million units. The situation is practically the same in the five countries. France and Italy recorded the biggest declines compared to 2021, while German data remained stable.

However, all of them recorded double-digit declines between 2019 and 2022. The lack of new cars in dealerships and the rising cost of living, partly due to the energy crisis, explains the critical situation.

Lastly, the situation in Spain is curious, with the Hyundai Tucson taking first place with a total of 21,985 units sold. The Dacia Sandero followed in second with the Seat Arona in third.

Interestingly, while the overall model ranking continued to be dominated by mainstream models, the BEV ranking had a clear winner. The Tesla Model Y impressed by leading the BEV markets in Germany and the UK, the two largest markets for these cars in Europe.

Unlike America and Europe, the situation in Australia, India, Indonesia, and Turkey has been quite good. Not only did the volume increase between 2021 and 2022, it was higher than it was two and three years earlier.

Australia, in particular, has seen a triumph of all-wheel drive vehicles. In first place was the Toyota Hilux, with a total of 64,391 units sold, closely followed by the Ford Ranger (47,479 units) and the Toyota RAV4 (34,845 units).

India, for example, had an all-time record of 4.37 million units, making it the world’s third-largest vehicle market, ahead of Japan. It is the first time that India surpasses Japan.

In Indonesia, the industry is firmly headed towards a volume of 1 million units/year which occurred between 2013 and 2018. The volume has increased by 17 percent compared to 2021 and by 95 percent compared to 2020. It is interesting to note that consumers have reacted quite positively to the introduction of the locally produced electric Wuling Air.

The Best-Selling Cars In Each Country In 2022

The author of the article, Felipe Munoz, is an Automotive Industry Specialist at JATO Dynamics.