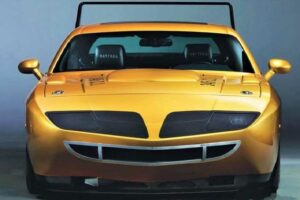 We are coming up on an inauspicious anniversary: almost a year ago, on April 1, 2021, the web was awash with fake news of SRT’s newest creation—the SRT Ghoul. Mopar fans who keep track of the current crop of Hemi-powered LX/LC chassis cars have had a lot to be happy about in recent years with cars like the Scat Pack, Hellcat, Demon, Redeye, Ram TRX, Jeep Trackhawk, Durango Hellcat, and Dodge Super Stock. What more could you possibly want from a company that has offered no fewer than ten models under $100k with more than 700 hp, inside the last eight years? Apparently, you can also want one with 1,000 hp, and that wish might even be granted—even if it won’t be called the SRT Ghoul.

A lot has recently been made of Dodge’s very public transition from internal combustion technology to sustainable EV technology. The return of the Fratzog logo was the first shot across the bow, and nobody is disputing that the Dodge promo video released here was the division’s first step in ushering its performance fans into the new EV era with the promise of guilt-free performance—if you don’t count emissions from tire smoke. The plan seems to be working, but the job Dodge faces in executing this 180-degree turn won’t be easy. It will have to keep the pipeline of ICE performance vehicles running smoothly and profitably while orchestrating a major shift in design and manufacturing behind the scenes, in time for the next generation of mind-blowing performance vehicles in 2024.

As ludicrous as a 1,000-hp Dodge SRT Ghoul may seem to outsiders, it’s game-on to anybody in the know, and that includes HOT ROD readers. With Dodge’s current crop of 700- and 800-hp overachievers, it simply makes no sense to stop now, given the fact that 1,000-hp EVs are waiting in the wings. The new generation of EVs will be quick—and expensive—but to bridge the gap, a powerful ICE/EV hybrid in the 1,000-hp range could be an influential tool for winning over older, more affluent legacy Dodge fans in the new age, and simultaneously gaining a new generation of tech-savvy gearheads.

What Is an SRT Ghoul?

The SRT Ghoul is not a real car, nor is an SRT Ghoul currently on the drawing board at Dodge. That’s the bad news. The SRT Ghoul is a 100-percent fabrication dreamed up by Jay Traugott, a writer at carbuzz.com, as a 2021 April Fool’s spoof. We love a good April Fool’s joke, but carbuzz.com really hit this one out of the park as it was picked up and amplified by DodgeCarUSA.com, and dealerships like Kendall Dodge and Briggs Dodge. (These stories are complete fiction, but totally fun if you know that going in.) The SRT Ghoul is now one of the most-searched topics and it doesn’t even exist. With that said, could there be a grain of truth that something similar might be in the offing? We think that given Dodge’s future direction, the answer is likely yes.

All the rumors surrounding the SRT Ghoul center around it being powered by a 1,000-hp Hemi—by most accounts that Hemi would be the 1,000-hp 426ci Hellephant crate engine. This, however, is highly unlikely because that engine was designed for the aftermarket and is too dirty to pass federal emission standards today, let alone in two years.

Related: What’s a Mopar? Here’s the History of One Hugely Misunderstood Brand

Nevertheless, Dodge got tantalizingly close with the 840-hp Demon, and it wouldn’t be too much of a stretch to imagine Dodge blending its new EV technology (a single motor driving one axle, putting out a loafing 300 hp) with the outgoing 717-hp Hellcat Hemi to bump total power up to 1,000 hp. In one stroke, this would do what Dodge president Tim Kuniskis has vocally wanted to do from day one: merge divergent legacy customers with younger fans of EV technology in one product channel.

Is it the SRT Ghoul, or the SRT Daytona?

If we take the 1,000-hp bogey for granted—and what gearhead wouldn’t?—we also have to take into account everything that having a 1,000-hp car entails, and that includes aerodynamics. Big power means big speed, and when you get into the rarified air of 1,000-hp automobiles, you can count on humongous tires and gigantic brakes, but it is the aero that holds out the tantalizing possibility that we could see the return of the Dodge Daytona—the real Daytona, not another sticker package. That means having a wind tunnel-tested nosecone and a rear wing big enough to make neon-festooned Honda Civics blush with envy.

The original 1969 Dodge Daytona was designed to win in NASCAR, which it handily did before being handicapped out of existence by Bill France, who forced Mopar stock car teams to run a laughably-small 305ci wedge instead of its born-with 426ci Hemi. Today, no one seems to mind that the Daytona was a one-year wonder. In fact, you’d halfway expect any new Daytona to be just that—a one-year wonder. By coming full-circle with a special-edition 1,000-hp Dodge Daytona hybrid in the final year of Hemi production in 2024, Dodge could cement its performance reputation with two bookends from one car: one bookend marking the end of the ICE age and another marking the beginning of the EV age.

SRT Ghoul: the End of the Grille

A 1,000-hp street-legal production car is a worthy goal for Dodge, and more interestingly, it remains in Dodge’s grasp. If you do a simple thought experiment and imagine what would be required to bring a 1,000-hp car to market for under $100,000, you quickly come to three conclusions: it has to have supplemental EV technology to hit 1,000 hp while staying clean enough for Federal certification; it has to have serious aerodynamics; and those aerodynamics will need to be of the static, non-active variety for cost reasons. Add those three things together and you end up with an SRT Ghoul that looks remarkably like a widebody Redeye Challenger with a Daytona nose and wing.

First, the SRT Ghoul will lose the grille. The world of EV cars is a world without massive drag-inducing grilles in front of giant drag-inducing radiators. As the Fratzog video has already revealed, the new Dodge EV will have a toothless face, and anything that gets the hot rodder to accept grille-less cars a little sooner will help. As it so happens, the iconic 1969 Dodge Daytona had no visible grille, even though it had plenty of cooling capacity and a ton of instant recognition. A Daytona-look nosecone (or the more aesthetically pleasing Superbird nose) would help with that public transition in what could be a high-visibility halo car.

Second, glue this sucker to the ground. If you make an argument for a 1,000-hp car, you must necessarily make it stick to the pavement. Anybody who’s flat-footed a 707-hp Hellcat past the 100-mph mark in Track mode knows the tires are ablaze like crazy, and that’s wasted rubber and horsepower. At 1,000 hp, aero is more than a fashion statement, it’s the key to surviving a stint behind the wheel and making your next car payment. The only way to power past that 200-mph aero wall is to make more tire bite with downforce through spoilers, spats, splitters, and wings. Once again, the 1969 Dodge Daytona not only has the engineering solution, but the powerful heritage that will call all Mopar fans back to the fold. Look for the SRT Ghoul to have the Daytona’s tall wing, cantilevered rearward for maximum downforce and elevated well into the clean air above.

Is the SRT Ghoul a Real Thing?

While the SRT Ghoul started out as a joke, there is nothing funny about the tens of thousands of “SRT Ghoul” search queries hitting the internet every month. What started out as a prank brought on by an auto journalist barricaded at home by the COVID pandemic may have taken on a life of its own. We give the 1,000-hp Dodge a better than 50/50 chance of happening, though that’s more than we can say for the name. While “SRT Ghoul” sure makes for easy searchability (a wise move for carbuzz.com) Dodge’s 1,000-hp curtain-call would almost certainly be called the SRT Daytona, given the high likelihood of its aero appearance. As it so happens, Heide Performance Products (HPP) designed and brought to market a Daytona body kit for the Dodge Challenger back in 2009 that we reported on here, photos of which we are showing in this story for comparison’s sake. It’s doubtful Dodge would bring an entirely new ICE-powered car to market for one model year, so if the SRT Ghoul (aka Daytona) happens, it would be on the existing LX/LC platform and take the general form of a Charger (less likely) or Challenger (more likely). In that case, it wouldn’t stray far from the HPP design shown above but would have the widebody treatment of the current cars.

Want to see a 1969 Dodge Daytona in action? Then check out this 2017 video of host Mike Musto heads out on an epic road trip across the United States, en route to Roadkill Nights and the Woodward Dream Cruise, where Musto and the Daytona battle breakdowns, meet up with fellow Mopar Enthusiasts, and go head-to-head with David Freiburger and Mike Finnegan in front of a crowd of 35,000 strong!