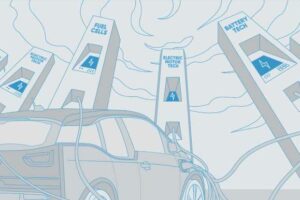 We all know EVs have fewer moving parts than their engine-powered counterparts. There are no engines to maintain, no belts to check, no oil to change; the list goes on and on. As you might imagine, having fewer mechanicals to check and maintain makes running EVs significantly cheaper, and the U.S. Office Of Energy Efficiency and Renewable Energy has recently given us insight into just how much cheaper electrics can be as part of a look at the government’s own vehicle fleet.

According to the office, internal-combustion-engine-powered (ICE) vehicles cost $0.101 per mile to maintain. Hybrid vehicles and plug in hybrids are cheaper to run, but only slightly, ringing in at $0.094 and $0.09 per mile to run. Full battery electric vehicles, on the other hand, are much, much less expensive to run and maintain, coming in at just $0.061 per mile.

How Much Cheaper Is an Electric Fleet?

As a way to over simplify (and helpfully visualize) just how much less expensive a fleet of EVs would be compared to a fleet of ICE-powered vehicles, we’ll calculate the running costs for the fleets assuming they were all ICE-powered and, separately, as if the fleet were 100-percent electric. The results?

The difference between the two values is drastic. But, keep in mind this calculation doesn’t even factor in how much money EVs potentially save in average fuel costs per mile, which would likely widen that $78 million gap to an even more eye-popping sum. Even though President Biden’s plan to replace every federally-owned vehicle with an American-made EV won’t happen right away, if ever, eventually such a move would save the government vast sums of money. That is, if there were electric vehicles in circulation that could directly replace every last light-duty vehicle in the government’s fleet.