The Mitsuoka Buddy Is the K5 Blazer-Styled Hero We Need We have to admit, the Toyota RAV4 isn’t the most obvious starting point for a turning a smallish SUV into a 1980s Chevy truck. But somehow Mitsuoka pulled it off with a few new body panels and a chrome grille. The Japanese retro conversion specialist and sometime automaker, infamous for creating cars that look like old Jaguars or catfish, has turned its attention to the latest Toyota sporty utility in creating the Buddy, imagining it as an early ’80s Chevrolet K5 Blazer.

The changes on the outside are actually pretty extensive, going beyond the grille itself. Every body panel ahead of the A-pillar has been reworked, giving the SUV a more squared-off appearance and a flatter hood. Out back, Mitsuoka swapped the original horizontal taillights that stretched into the tailgates with more vertical taillights and changed the quarter panels holding them in the process. The tailgate itself has also received new sheetmetal complete with a big, rectangular horizontal stamping meant to evoke old Chevy trucks. The taillights look like something out of the Cadillac parts bin, and they work well enough aesthetically to suggest something retro American, even if their placements seems a little random.

Another cool detail that’s easily overlooked is that the tailgate dips into the chrome rear bumper – a bold stylistic choice – but the panel gaps of the tailgate are perhaps best described as “generous.” And the two uneven rectangular holes where the tailgate handle should be look a little unfinished. They would look better with the a chrome handle of some sort covering them. 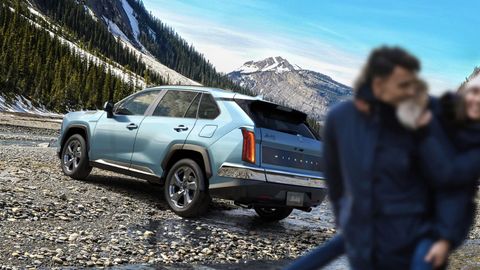 Can you buy one of these here?

Not quite, but you may be able to have the body panels shipped to you. But fitting them on to your RAV4 is a much more complex, warranty-voiding matter that will involve things like headlight height requirements, pedestrian safety issues and air bag triggers. The RAV4 will surely pass emissions – let’s put it that way.

With the debut of the vaguely retro-styled Ford Bronco, we have to wonder if Chevy’s latest Blazer is an opportunity missed. If not a completely retro grille, the model could still have received some vintage touches as an homage to Blazers of decades past, given the current nostalgia for all things ’80s.

A very special guest star in the video above is a Moskvitch pedal car, made by the actual Moskvitch factory known as AZLK. It appears at the 0:29 mark in the video and, given the inconsistent lighting and focus, it’s obviously a separate layer that was pasted in.

A cult toy in the former USSR and former satellites, the Moskvitch pedal car is styled after the 408 sedan, and was produced from the early 1970s through 1994. It was just about the most desirable toy for a whole generation of kids, and its ownership was a status symbol of sorts for pre-schoolers. Almost four feet in length, the Moskvitch featured a working horn and headlights, among other items. A container of these Moskvitches made it to the States in the early 1990s, and these pop up for sale from time to time. 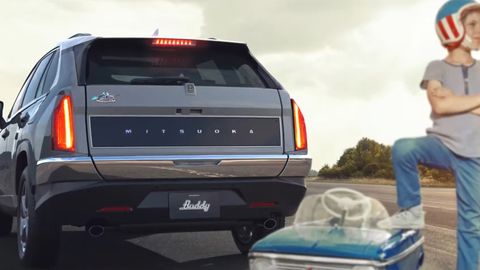 But one thing we have to wonder, from a purely video production standpoint, is whether Mitsuoka actually filmed this video somewhere in the U.S. after transporting one of the cars here for a photoshoot, or whether they shot this with a regular RAV4 as a stand-in and later photoshopped it together?

The video doesn’t show the Buddy driving in any location, and all the shots of the car in the video are static. And far from all shadows of people and vehicles really match the environment, and lighting and depth of focus is also inconsistent in the static shots in the video. Multiple elements in every shot of the car in a given environment are off, suggesting it was photographed somewhere in Japan and then pasted into plates of environments photographed in the U.S. But the sleight of hand almost works: the video and stills don’t show more than they have to, and the video doesn’t linger on any one still, lest you start noticing inconsistencies.

One thing is for sure: We’ll never be able to look at a RAV4 again without thinking about the Mitsuoka Buddy. Surely Toyota, no stranger to retro-styled vehicles like the FJ Cruiser (which needs to reenter production stat, by the way), could also be persuaded to field something retro-styled again, but inspired by its own history? Toyota once did this in the 1990s with the Origin sedan, which will be importable in five years. Start saving up for it now.

Sign up for comments and let us know what you think about the Mitsuoka Buddy. Does the SUV work well visually?

END_OF_DOCUMENT_TOKEN_TO_BE_REPLACED

END_OF_DOCUMENT_TOKEN_TO_BE_REPLACED
We and our partners use cookies on this site to improve our service, perform analytics, personalize advertising, measure advertising performance, and remember website preferences.Ok