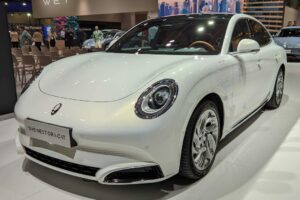 Naturally, Ora is following up the Funky Cat with the Next Ora Cat, a larger four-door car revealed in concept form in Paris…

How do you follow up on a car called the Ora Funky Cat? With the Next Ora Cat, obviously. The naming strategy employed by Great Wall’s Ora might raise a smile, but the brand is serious about clawing its way into the more affordable end of the European electric-car market.

The Next Ora Cat was unveiled in concept form at the 2022 Paris Motor Show, although the car on the stand is very close to being production ready. It’s described as a four-door coupe and amounts to an elongated version of the Funky Cat hatchback measuring 4,871mm long and 1,862mm wide, that’s 636mm longer and 37mm wider. It will rival electric models like the Hyundai Ioniq 6 and Tesla’s Model 3.

As with the Funky Cat, the Next Ora Cat appears to borrow some design inspiration from Porsche, transposing the oval headlights mounted on pronounced front wings and a domed rear end with flip-up spoiler onto a compact saloon body. Inside, there’s a 10.25-inch digital instrument cluster within three interlocking circles. This and a three-spoke steering wheel sit ahead of the driver with a 12.3-inch infotainment screen mounted centrally above a high centre console that houses physical climate control dials.

Performance in the Next Ora Cat is probably more abundant than the cute, curvy looks might lead you to expect. The four-wheel-drive electric powertrain uses two motors that can deliver a combined 402bhp and 680Nm of torque, enough for a 0-62mph time of 4.3 seconds and a 112mph top speed.

The car’s 83kWh battery is capable of a 267-mile range, although that’s under Chinese testing conditions. On an 80kW DC charger, the battery can be replenished from empty to 80 per cent in 55 minutes.

The concept is fitted with a set of elaborate 19-inch alloy wheels and a full-length panoramic sunroof that curves with the car’s coupe-style roofline. Along with 360-degree parking cameras, Ora has also included a face ID system, whereby the ‘Next Cat’ can recognise its driver to allow entry and start functionality. There’s no word yet on which technology features will make it to the production version.

The Ora Funky Cat is on sale in the UK now priced from £31,995 in First Edition guise and the eventual Next Ora Cat production car would slot into the range above this model. The brand also plans to add a compact SUV to its line-up in 2024.

Thinking of trading up to a new electric car? Sell your old car fast with our tool…