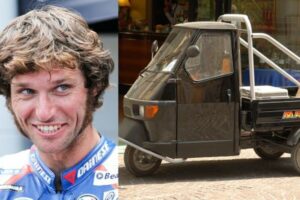 The new Channel 4 series Guy’s Garage will see the former motorcycle racer turn four classic cars into speed machines. In this episode, Guy and his work partner Cammy, looked to transform a Piaggio Ape into a Proto Ape racing machine.

A Piaggio Ape is a three wheeled scooter which can be used as a van, and has been dubbed as one of the slowest vehicles to come out of Italy.

The major change between this and any of the previous vehicles that Guy Martin has worked on this series, is that the Piaggio has handlebars as opposed to a steering wheel.

Guy’s lofty ambitions saw the former motorcycle rider travelling to Italy to visit Francesco and Daniele to have his first try at driving and racing a Piaggio.

He said Piaggio’s were “dead popular in Italy”, adding “you’re not going to find one of them on Grimsby High Street, are you?”

A normal Piaggio Ape has 20 horsepower and has a top speed of 40mph when driving downhill, when used conventionally.

In comparison, Francesco’s “three wheeled Italian rocket ship” had a top speed of over 100mph and has six times the power of an authentic Ape.

The Italians gave Guy a few simple instructions: “Always in second gear, full gas, no brakes and never (take your foot) off!”

Back in the UK, Guy managed to pull off a bargain by getting a Piaggio Ape from the UK for just £1,750, which used to be a van for selling coffee, almost 50 years ago.

Guy and Cammy managed to knock £250 off the price by offering to take the engine off the vehicle in a golf club car park.

After initial hesitation of the vehicle, saying “she’d have a job pulling the skin off a rice pudding”, he decided to stick with the vehicle and turn it into a racing machine.

Controversially, Guy and Cammy installed a 1200cc engine, rather than the 600cc engine that is usually used in Italy for Proto Ape Racing.

Guy spoke of how difficult it was to find somewhere to practice racing a three wheeler vehicle.