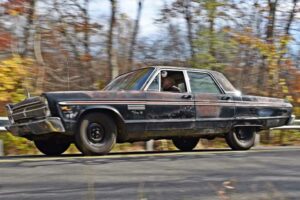 Chuck Fisher is no stranger to the muscle car hobby. He has been fighting the good fight for most of his adult life, saving models from the heyday of factory muscle and preserving them at his place in rural Connecticut. All along, he has done it the old-fashioned way, collecting cars piece by piece through hard work. “I started collecting as a teen, and with limited funds, I used bartering, scavenging, trading, and some good ol’ plain luck. I’ve put together a small but eclectic collection I’m pretty damn proud of,” he says.

His collection of muscle car rides from the ’60s and ’70s is nothing to sneeze at. Mostly made up of survivors, day-two rides, and some dusty drag cars, it’s a group of powered-up hot rods that would make even the most seasoned car-nut wig out in a maniacal conniption. However, even Chuck wasn’t prepared for his next automotive barn find, a certain oddball that was about to make its way into his possession.

Four Is His Lucky Number

The story on how he scored his new more-door muscle machine is nothing out of the ordinary—he spotted it online. “The car was listed on a popular online marketplace by a guy who had recently purchased it at an auction. I would never look at a Fury, let alone a four-door. It’s not my thing. But I couldn’t ignore the tag line, which stated it had a four-speed and 426 cubic-inch mill under the hood. So, that phrasing grabbed my attention,” states Chuck.

Curiosity piqued, Chuck went to take a peek at it, figuring the Plymouth had been pieced together from several different cars. “When I went to check it out, there was another guy there looking at other parts the owner was selling. He was also thinking of buying the Fury just for the drivetrain,” he says. Chuck worked quickly, asking questions about the big black Mopar. With one sentence, Chuck had an epiphany, “I asked the guy if he did the four-speed swap. He replied, ‘it came that way,’ and he put all the original paperwork in front of me to prove it—buildsheets and all.”

Chuck immediately assumed the full-size Plymouth Fury had been ordered with a police package. “I saw the certified speedometer, which backed up my theory. I thought only cop cars or other government-ordered cars could be had with that option. Knowing it was a rare ride, I immediately bought the car and loaded it up.”

Once back at the family compound, Chuck started going over the bizarro Mopar. “I started to decipher the buildsheet and fender tag only to find that it was not in fact a cop car, but was an original 426, four-speed, four-door civilian ride. As I began to dig deeper, I realized that, for some reason, this car was special-ordered with that speedometer, this drivetrain, in this color … with four-doors. I got real curious. I wanted to know why.”

A Paper Trail From the Dealer

The dealer order lays it all out. The Plymouth Fury was ordered at Marion-Burnside, a Chrysler-Plymouth dealer in Columbia, South Carolina, in the fall of 1965. If that name sounds familiar to you, it should; over the years, it’s been linked to NASCAR and to the King himself, Richard Petty. There are records of Petty Enterprises receiving at least one Superbird from that dealership, and old photos can be found floating around on the ‘net of Petty’s interaction with this Plymouth dealer.

The original owner traded in a ’60 Biscayne as part of the deal. Besides the special speedometer (which cost $116), the Fury was optioned with power brakes, tinted windows, bumper guards, manual steering, and was bathed in BB-1 Black paint. The powertrain was made up of the Commando 426 Street Wedge, rated at 365hp and 470 lbs/ft of torque. It’s backed by an A-833 four-speed transmission and an 8 3/4 Sure-Grip rear stuffed with 3.23 gears.

Looking at the options chosen, especially the paint and four-door layout, the conclusion would have to be that this particular owner wanted to blend in—to not be too conspicuous, but have a drivetrain with enough grunt to take on the road. The sheer size of the Fury would suggest they were going to have some people along for the ride, or at least needed enough room for carrying a decent load. There was also a weird aftermarket switch mounted to the steering column. “It looked like an old turn signal switch. I had to look into exactly what it was put there for,” states Chuck.

Chuck had some thoughts about what this ride could be. He decided to take it to the web and see if anyone knew of the car and its history. “The first thing to do was to look for anyone in the Columbia area with a similar surname as the original owner, looking for family who might know the car. Next, I posted some photos and background on the Fury on some popular Mopar sites, looking for a hit. Well, I didn’t get a nibble, I got a boat load of bites. It made me rethink this car’s history.”

One major comment came from a guy local to the Columbia area. “He asked me how many leaf springs the car had. I didn’t know off hand, as the thought to look didn’t hit me right away. So, I went out back and checked. There was a stack of eight out on each side. I couldn’t believe I missed that. I called the guy back and told him there were eight. He told me that he knew the Fury. It was definitely a bootlegger’s car!”

A moonshine-runner? Things were starting to make sense now—a black, four-door, tinted-out Fury designed to fly under the radar; the burly drivetrain chosen to navigate the rolling hills, but the design of a “family” car to blend in with other vehicles in the vicinity. A certified speedometer meant the driver knew exactly at what speed they were traveling at all times. It was a helpful add-on if you never wanted to get pulled over for speeding.

Throw in the manual steering and power brakes—a combo that works well at high speeds—and you can figure what kind of performance the owner desired. It’s also a car with plenty of storage space, and the heavy-duty suspension out back would keep the ride level, even with a fully-loaded trunk. “It was all coming together, and people were coming out of the woodwork to back the theory up. “I thought to myself, ‘this car is not a cop car; it’s an anti-cop car,” laughs Chuck.

Related: Moonshine Runners, History, and Their Cars: Looking Back at Junior Johnson

Over the next several weeks, Chuck was flooded with stories of the Plymouth Fury’s past life from individuals who answered his social media inquiries. “I joined a site that dealt with the history of Sumpter Speedway, an old roundy-round track in the Columbia area. I was looking for more info. An older gentleman responded who knew the car and the original owner. His family had a repair shop that had worked on the Fury over the years, and his brother backed up the moonshine and bootlegging theories.”

As information poured in, Chuck took a closer look at the car and even tried to get it started. “I realized that the wiring harness was totally butchered due to an aftermarket air-conditioning unit that had been installed some time in the past. It led me back to that switch on the column. What exactly did it do? I needed to know,” he says.

It didn’t take Chuck long to decipher the rat’s nest of wiring under the dash. “I traced the wiring and discovered that the switch controlled the rear taillights. It was a cut-off switch—a typical add-on by bootleggers in case they were being followed. One flick and the lights go out. That  resolved another piece to the puzzle. I removed it due to the fact it was poorly done. I’m going to put it back in when I redo the car,” states Chuck.

There was also an odd cut and weld along the package tray’s front seam. Chuck described it, saying, “It looks as if it had been possibly cut out at one time. With that metal removed and the back seat out, you had one continuous cargo bay from the trunk to the front seats. Sometime afterwards, it was welded back in and the seat reinstalled.”

Chuck has since spoken with more people who have some connection to the car, all backing up his theory on why this car was ordered the way it was. It all points to the same conclusion. “You just can’t get more real than this car, if a car could tell a story just by looking at it, this would be one of those cars. It’s too bad the owner passed away, because I would have loved to talk with him about it,” Chuck laments. We applaud Chuck’s efforts to research and preserve this car as it was during its heyday on the backroads of the Carolinas.

Watch a Full Episode of Roadkill! 24 Hours of Lemons in a 1973 Plymouth Fury

On episode 22 of Roadkill, David Freiburger and Mike Finnegan attack the low-buck endurance race called 24 Hours of Lemons. Not content do do this ridiculous race in a reasonable car like a handling-oriented import, the race car of choice is a one-owner 1973 Plymouth Fury that Freiburger bought for $200 before setting it on fire a few times then gutting it into a race car. Watch episode 22 now, then sign up to MotorTrend+ for a free trial and start watching every episode of Roadkill today!