Home » Car Reviews » This Is the Acura NSX Evo22

This Is the Acura NSX Evo22 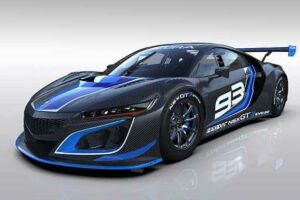 Just this week, we informed you that the final version of the upcoming NSX Type S would be the last hurrah for Honda’s high-powered hybrid, but that isn’t the only news surrounding the brand’s flagship. HPD (Honda Performance Development) just announced that an enhanced NSX GT3 will be seen in action on racetracks around the globe next year.

If you recall, the NSX GT3 was introduced to race teams four years ago draped in a carbon fiber body, sans hybrid system but fitted with a sequential six-speed transmission—and a price tag of about half a million dollars. Since that time, teams jumping behind the wheel of the race-only offering have certainly found success, including 25 class wins in IMSA GTD and SRO GT competition, with the car currently serving as the GTD and SRO GT Manufacturer’s champion.

This time around, the NSX GT3 gets the Evo22 label added to its name along with some updates to help make it even more competitive. Namely, improved intercoolers for better charge cooling and more consistent performance, regardless of weather conditions. Honda also modified both the spring rates and suspension geometry to maximize grip.

For the endurance racers, increased fluid tank sizing will allow them more time on the track and less time refilling, while unspecified wheel system revisions are said to allow for quicker tire changes. There are also new variant options for headlights and air conditioning system, along with an FIA-mandated rain light.

Like the NSX GT3 that came before it, the new Evo22 chassis will originate from Honda’s Performance Manufacturing Center in Ohio before being delivered to JAS Motorsport in Milan. There, the experts will take on final assembly and all necessary adjustment to deliver a turn-key race car. They’ll also provide technical support for the vehicles along with replacement parts sales. Homologated through 2024, the project is already green-lit and in motion.