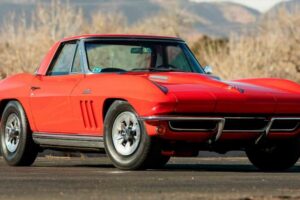 Typically, time is merciless. Metal rusts, fabrics fade, and rubber crumbles. But occasionally something comes along that is so shiny, so bright, and so beautiful that even time seems to take a rest when it passes over. This 1965 Chevy Corvette Sting Ray convertible, still almost completely original from the day it left GM’s factory, is so immaculate it appears to have beaten the evils of time for good, and somehow it’s now up for grabs at this weekend’s Mecum auction.

We don’t have to exaggerate the qualities of this particular Sting Ray too much, as it’s clearly been adequately appreciated by others before, winning a coveted “Top Flight” award. In the Corvette world, the Top Flight award, as judged and crowned by the National Corvette Restorers Society (NCRS), is intended to highlight and reward vehicle originality. They’re looking for classic Corvettes as accurate to the day they left the factory as possible, and this Rally Red example is about as close to time travel as you can get.

This 1965 Sting Ray convertible has been honored with the award, according to the Mecum auction listing, thanks to polished chrome accents, a surprisingly tidy black vinyl interior, and its beautifully bright red paintwork—which is still in great condition even on the removable hardtop shell roof. The car is being auctioned as-is, in “unrestored” condition, having covered just 51,630 miles on the original powertrain.

Under the hood is a Mark IV big-block V-8 engine that was introduced the same year this car was built, which was originally rated at a whopping 425 horsepower and 415 lb-ft of torque (okay, gross hp, but still)—very impressive numbers for a car this small, even today. The V-8 is still paired to its original four-speed manual gearbox.

This example is one of 2,157 Corvettes assembled in 1965, and we doubt there are many others out there in as quality a condition as this one. Fortunately for whoever wins the auction bidding, the period-seeming Continental tires are not from 1965, so the road rubber will be fresh and safe to drive on.

The package is finished off with a Delco AM/FM radio inside, a single, chromed side-view mirror, a Soft Ray-tinted windshield, and steel wheels with knock-off hubcaps.

The Mecum listing goes up for auction this Saturday, March 19, 2022, and is anticipated to go for a price north of $100,000, if you’re interested in owning what we think is one of the coolest cars in the world.