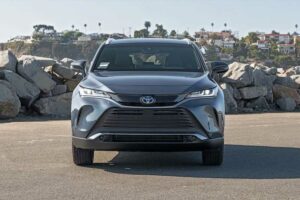 Since our last update, our 2021 Toyota Venza has kept rolling. Although life slowed down for the Venza after our cross-country and interstate family trips, the hybrid continues to be a welcomed member of our long-term fleet. Some staffers have praised its premium cabin and quiet ride, while others have complained about its poor packaging. After spending a year with it, here are three things we like about the Venza and two we don’t.

From the technology to the overall interior design, the Venza’s cabin feels like a step above what we’d come to expect from Toyota. Even in our midgrade XLE model, the Venza feels like a luxury SUV. Its cabin features soft leatherette seats with heat and ventilation for the fronts, plus a heated steering wheel. Although we’re not huge fans of the functionality of the capacitive controls for the AC and infotainment system, we like its premium, clean look.

Despite sitting between the RAV4 and the Highlander in Toyota’s SUV lineup, the Venza has less interior space than its smaller sibling. This is mostly because of the packaging, given that the Venza is larger overall than the RAV4. Part of it has to do with its taller stance (and high cargo floor) but also because aesthetic design work played a key role in the development of the Venza. Even when compared to the RAV4 Hybrid, the Venza is less spacious.

The Venza isn’t the most fun SUV to drive, but it gets impressive fuel economy numbers. Delivering an EPA-rated 40/37/39 mpg in city/highway/combined, the Venza is among the most fuel-efficient two-row midsize SUVs. This means that not only are we spending less money on fuel, but we’re also wasting less time at gas stations. We’ve been averaging about 35 mpg on road trips, which is at least partially a result of the high speed limits and high winds on those trips.

While Toyota works on an all-new infotainment system for all its new vehicles, the Venza soldiers on with the old system, which is a bit slow to respond and needs better graphics. The 12.3-inch touchscreen is big and at first glance looks like a premium system, it needs better resolution. Frankly, the system looks like it was designed a decade ago, and compared to the new systems we’ve seen in the Venza’s competitors, this one sits toward the bottom of the chart.

Performance is not the Toyota Venza’s primary focus, but it nonetheless offers an adequate drive. The electric motor delivers instant torque to the wheels, which allows the gas engine to build more push as the Venza gains speed. Its performance numbers are not stellar—0-60 mph in 7.1 seconds and quarter mile in 15.4 seconds at 90.4 mph—but on the road the Venza feels quicker than that. At wide-open throttle, the engine sounds like it’s stressed out, but it will deliver power quickly.