TOM’S Does Its Thing to the Toyota GR 86 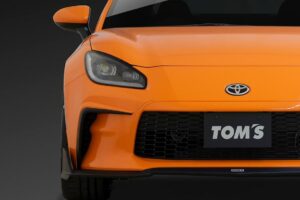 Nope, this Toyota GR 86 isn’t a reference to the thin-soled, pseudo-hipster shoe that swept the nation a few years ago. This TOM’S Co., Ltd. is based in Japan and has been knee-deep in all things Toyota since the 1970s. Back then, talented Toyota factory driver Nobuhide Tachi joined forces with Minoru Oiwa, the head honcho of Toyota’s Sports Corner—the predecessor to TRD. The duo, with the help of a few additional backers, would go on to open their Toyota certified tuning outfit and by the late ’70s, became widely recognized for their original wheel designs and speed parts.

It didn’t stop there, as Tachi and Oiwa blazed their way into the ’80s, their operation grew with a new headquarters, dedicated motorsports garage, and a laundry list of race wins that would go on to span over four decades. In addition, their parts development operation has continued through to the present day, as demonstrated by their recently unveiled GR 86 concept vehicle.

TOM’S cites Super GT’s GT500 class vehicles as the inspiration for their effort, toned down in order to make sense to the general public. As with other tuning groups that have modified the newest version of Toyota’s smaller sports car, the front end is enhanced with a lower bumper lip that looks like three separate pieces from a distance, though closer inspection reveals it is in fact a single piece. The lip hugs the bottom of the bumper and provides a slight lift in the center section, with each end capped by an integrated winglet that extends a few inches beyond the bumper line.

In order to square up the rounded, upper portion of the car’s main grill opening, TOM’S created a filler piece. In factory form, the upper grille opening is solid plastic, and this trim piece not only covers that unused section but slightly reshapes the grille enough to force a double-take. In addition, the black scalloped bumper openings on either side of the center grill get thin garnish pieces, giving the front end a sleeker overall appearance.

Along both sides of the 86, matching black side diffusers are attached, again using the winglet design as it makes its way under the rear quarter panel. The flat side skirts jut out from the OEM rocker panel with enough length to meet the front lip’s winglets and the rear extensions.

The end pieces in the rear are connected to the diffuser that not only wraps around both sides of the bumper, but sits substantially lower, and reshapes the exhaust openings. The innocent (almost to a fault) GR 86 rear toughens up with the more pronounced diffuser which hides the muffler entirely while granting enough space for the TOM’S “Barrel” quad-exhaust finishers produced in titanium with the brand’s logo etched in. The stacked oval tips remind us a bit of the units on the Lexus RC F. You can opt for the rear diffuser with the stock exhaust, but you can’t run the TOM’S axle-back system without the elongated openings of their diffuser.

Subtlety remained a priority on this concept, and the towering rear wing that will undoubtedly make its way onto a number of these cars when they’re released in the wild is nowhere to be found. A slight extension to the trunk lid, not unlike that of the HKS concept we showed you recently, is almost lost with the bumper diffuser and titanium trumpets stealing the spotlight out back.

The fender flares are equally low-key; you probably missed them entirely when you looked the car over. Extending the fenders by 8 mm, the front and rear pieces demand a commitment, as they do require cutting and drilling the car’s body in order to complete the install. With that additional clearance under each wheel well, you can easily fit wider wheels like TOM’S Cross Speed rollers in 19×8.5 +45 front, and 19×9.5 +45 rear, and even show off some high-performance brakes, like TOM’S four-pot front and rear system. As you might expect, the tuning firm also developed its own suspension kit and reinforcement bracing for this concept.

Open the door, take a whiff of that new car smell, plop down in the factory bucket seat, and grab hold of the TOM’S Racing steering wheel and you’ll notice a display baked into the upper portion of it, which relays various bits of information and provides a programable shift light. The factory leather shift knob is replaced by a carbon-fiber and machined aluminum version, and even the parking brake (yes, an actual lever, not a switch) gets the aluminum TOM’S treatment.

The parts used for this demo car will most likely be available in the coming months as parts development continues, and the next generation GR 86/BRZ continues to build momentum.