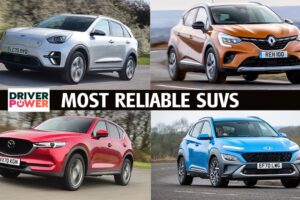 Reliability should be a top concern when buying a new or used car. Of course, a car’s looks and acceleration may entice you initially, but the reality is that you won’t be able to enjoy any car if it’s constantly in the garage being repaired. It can also be difficult to discover which cars are the most reliable.

You might assume that the most reliable cars you can buy are tough, heavy-duty 4x4s and SUVs. In truth, the wide array of on-board technology and varied, complex powertrains available on modern cars can be just as susceptible to faults, no matter the shape or size.

Every year the Driver Power survey picks out the most reliable cars in the UK with information from the people who know them best, their owners.

The Volvo XC40 continues to hold a solid reputation for reliability. It may have dropped down from eighth place in last year’s survey, but with a score of 93.69 per cent, it’s still a pretty solid buy. The most common issue with the XC40 is with the electrical systems, with 24% of owners reporting a fault. However, reported problems remain relatively low overall.

The Niro is one of several Kias with impressive scores for reliability, which should go some way towards backing up the brand’s confidence in its standard seven-year/100,000-mile warranty. The plug-in and hybrid Niros scored a respectable 93.71 per cent overall. However, the fully-electric e-Niro proved even more dependable, as you will see further down this list.

Another model making a repeat appearance in this list is the Toyota C-HR, which has actually moved up from its ninth place finish in 2021. Toyota has long held a solid reputation for reliability and build quality but, perhaps surprisingly, the C-HR is the only one of the brand’s cars to make our top ten this year, with a score of 93.96 per cent.

The Volkswagen T-Roc also finds itself returning from last year’s list, but has dropped two places. Interior quality could be better, with scratchy plastics being a notable disappointment. The on-board safety features have also proven problematic in some instances. However, the T-Roc remains exceptional when it comes to overall reliability, with a score of 94.06 per cent.

The Renault Captur is single-handedly shattering the age-old stereotype of French cars being notoriously unreliable. Not only is the Captur the 6th most reliable SUV, but it’s the 10th most reliable car overall, with a score of 94.27 per cent. Sadly, however, the Captur hasn’t quite managed to completely shift all of the problems that are typically associated with French cars, as 50 per cent of owners experienced an electrical problem.

Taking several moving parts out of the already reliable Niro and inserting an electric drivetrain has certainly proved to be a winning approach. The e-Niro ranks four places higher than its petrol-electric siblings with an even greater display of durability. Some electrical gremlins were experienced by 37 per cent of owners, but satisfaction was still very high overall, with a reliability score of 94.36 per cent.

This year’s top-ranking car overall in the Driver Power Survey didn’t quite manage to take first place when it comes to reliability. The XCeed’s engine seems to be a bit of a weak spot, with 36 per cent of owners reporting a problem, while 29 per cent of owners reported issues with the exterior paint and trim. That said, the XCeed is still a great car overall, and even if issues do arise, the brand’s seven-year warranty should have you covered.

Our runner-up in overall owner satisfaction takes another podium finish in the reliability rankings with a score of 95.57 per cent. Just 25 per cent of owners reported electrical and interior trim issues with their CX-5s, but the vast majority have enjoyed trouble-free motoring.

It’s available in mild-hybrid, full-hybrid and fully-electric forms, but whichever version of Kona you choose it should prove to be dependable and drama-free. With an impressive reliability score of 95.71 per cent it falls just short of the top spot but remains a top performer. As with a number of the cars that made the list this year, electrical issues seem to be a particular cause for concern for Kona owners, with 45% reporting an issue.

The most reliable SUV of 2022 is also this year’s most reliable car overall, the Skoda Kodiaq. With a highly impressive reliability score of 96.23 per cent, the Kodiaq impressed owners with its robust build quality and ability to endure the demanding tasks of family life. The gearbox and interior trim were a cause of concern for some owners, but the majority of these issues should have been rectified under warranty.

Most reliable 4x4s and SUVs top 20

Click below to find out the most reliable cars by sector…