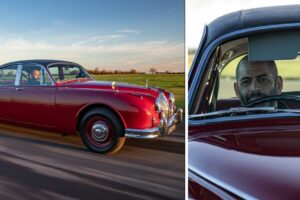 The classic British-made model was declared top of the cops by over half (53 percent) of those surveyed in a new poll, commissioned by Top Gear. It was closely followed by Gene Hunt’s Audi Quattro from Ashes to Ashes (43 percent), and the Ferrari 308 GTS that starred in Magnum, PI (41 percent).

The survey of 1,000 British adults comes ahead of this Sunday’s second episode of the new series, where the presenters put several legendary TV crime-fighting cars through their paces, with hilarious results.

The episode celebrates an era when telly police cars were as famous and recognisable as the actors who drove them.

In the new episode, presenter Chris Harris spoke about his admiration for the iconic Jaguar seen in Morse and how it left an impact on him.

He said: “The Mark 2 originally had a reputation for grace and sophistication but by the 1980s when Morse was on the TV, it had a different image, it was a bit more bank robber than stately home.

“But it all fitted with Morse’s character, the curmudgeon and intellect who loved real ale and crosswords and disliked pleasantries.

“If a great TV police car can say something about the character or driver that almost no lines could, then this is the best of the lot.”

The Mark 2 epitomised Jaguar’s motto of “grace, pace and space”, with almost a third of respondents identifying Morse’s chosen crime-fighting vehicle as the ultimate TV cop car in terms of classic style and design.

Seven in 10 of those polled declared the 1960s as the greatest era of iconic car designs.

“A true British classic that was a genius bit of casting which told you so much about Morse as a character.

“We were delighted to have the actual Jaguar Mark 2 from the show out on the track and to see the joy it brought to Chris Harris behind the wheel who is a Morse fanatic.”

The Ford Sierra Cosworth driven by Freddie Spender (24 percent), Jim Bergerac’s Triumph Roadster 2000 (24 percent) and the Ford Zephyr from Z Cars (21 percent) just missed out on a placing in the poll.

A staggering 70 percent of respondents stated that the design and iconic look of a car are the most desirable features.

As well as taking a drive down memory lane in some of their old TV cop car favourites, this week’s show sees Freddie on a mission to give the Sinclair C5 one more eccentric adventure.

In it, he puts his neck on the line, literally, by attempting to break the national speed limit in a C5 bobsleigh – christened the “Ski5”, naturally – down Lillehammer’s Olympic luge run in Norway.

Freddie Flintoff, Chris Harris and Paddy McGuinness are back for their sixth series at the wheel - Top Gear airs this Sunday at 8pm on BBC One and BBC iPlayer.