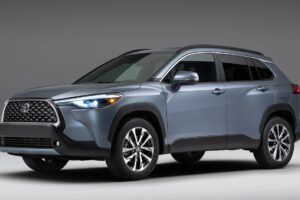 The 2022 Toyota Corolla Cross is due to add a gasoline-electric hybrid powertrain to its options list next year. The announcement of the likely 2023 Corolla Cross Hybrid was made during the reveal of the small SUV.

While entry-level SUVs have grown like weeds, gasoline-electric hybrid options remain a scarcity in the segment. As such, it’s a space the Corolla Cross can capitalize on. Players such as the Kia Seltos, Honda HR-V, and Buick Encore GX all rely strictly on gas engines for power, while the Subaru Crosstrek Hybrid is a plug-in hybrid.

Look for the Toyota Corolla Cross Hybrid to come out in the first half of next year.