Toyota Corolla Cross SUV could arrive in the UK in 2023 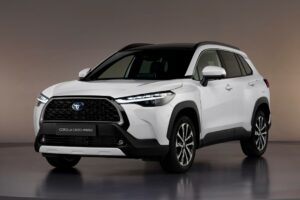 Toyota was one of the trailblazers in the world of SUVs, with its original RAV4. Sitting beneath the RAV4 is the C-HR – which will get an all-new successor in 2023 and next to it could be this, the new Corolla Cross.

The Corolla Cross will have a different approach to the C-HR. The C-HR has always been focused more on style than outright practicality, whereas the Corolla Cross’s more upright stance and pragmatic shape reflect its positioning as a full-blown family SUV – a rival for the likes of the Nissan Qashqai and VW Tiguan.

It’s 4.46 metres long – so a couple of centimetres longer than the Nissan – but the Toyota’s wheelbase is slightly shorter, at 2.64 metres. The car is based on the same TNGA architecture that underpins all modern Toyotas, including both the C-HR and the larger RAV4.

The Corolla Cross has been on sale in other regions for a while, with varying powertrains, but European-spec cars will be offered only with the latest, fifth generation of Toyota’s hybrid system. In standard form it uses a 2.0-litre engine and a lithium-ion battery, plus a 111bhp front-mounted electric motor for a total system output of 198bhp. That’s enough to take the Corolla Cross from 0-62mph in 8.1 seconds.

The car will also be available with four-wheel drive, thanks to a second electric motor on the rear axle – although this configuration doesn’t bring any more overall power, because the petrol engine’s output is adjusted accordingly.

Toyota claims the latest incarnation of the hybrid set-up – which will, in time, be rolled out on the C-HR and RAV4 – delivers stronger torque and greater electrical power while not compromising on fuel efficiency. Toyota says the Corolla Cross has been “adapted to European tastes” and highlights adjustments including a different front grille, along with new headlights and tail-lights. Inside, there’s a 12.3-inch fully digital instrument cluster that’s unique to European models, as well as a 10.5-inch infotainment system that, in a first for Toyota, can accept over-the-air updates while offering cloud navigation and remote control features.

Toyota is still yet to decide on if the Corolla Cross will come to the UK and there's no word yet on pricing, but we’d expect it to slot in between the C-HR and the larger RAV4, with a starting figure of around £29,000.

What does the new Toyota Corolla Cross have to beat? Check out our list of the best SUVs on sale now…