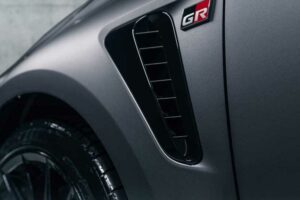 It’s long been expected that the next GR product to come out of Toyota—that’s Gazoo Racing, its performance division—following the GR86 sports car and the wild, all-wheel-drive, three-cylinder GR Yaris not sold here would be a GR-ified Corolla hatchback. Does that mean the fender and rocker panel in the photos included here belong to the upcoming GR Corolla? Toyota isn’t saying, so we’re only speculating based on the preponderance of evidence that such a model is imminent.

You see, Toyota has been teasing the GR Corolla hatchback for months now, in a very public way: It’s been slipping a camouflaged example into the backgrounds of photos of current, regular Corollas it posts to its Instagram account. So, unless there’s a different GR product about to beat the Corolla to a big, splashy reveal, our money is on these teasers belonging to that model.

In the images, we can make out an aggressive front fender wearing both a GR badge and a gaping extractor vent. The other photo appears to be of a rocker panel—the trim strip beneath a car’s side doors—with “GR-FOUR” debossed in it. For those scratching their heads, “GR-FOUR” is Toyota’s name for the performance all-wheel drive system installed in the GR Yaris. As you can see, the car pictured here is no Yaris—so, again, more signs are pointing to the GR Corolla.

The GR Corolla, by the way, is widely anticipated to utilize that GT-FOUR drive system, as well as a possibly even more powerful version of the unusual turbocharged three-cylinder engine that powers the smaller GR Yaris. Look for wings ‘n things on the exterior, a manual transmission, and a total suspension overhaul to take on the likes of Honda’s Civic Type R and the Hyundai Veloster N. We’ll find out for sure what this new GR product is March 31, when Toyota promises it’ll be revealed.