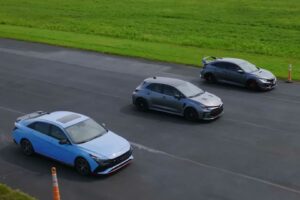 We know the Toyota GR Corolla is an overachieving hot hatchback, but we haven’t had many opportunities to see it ripping down a drag strip. Admittedly, this new Throttle House video doesn’t take place at a proper strip. But with open tarmac in a controlled environment, there’s ample room to let the little three-cylinder engine sing.

It’s also an opportunity for a three-way drag race against some other overachieving compact runabouts. Facing the GR Corolla is a Hyundai Elantra N, packing 276 horsepower from its turbocharged 2.0-liter four-cylinder. The other competitor is a Honda Civic Type R, though sadly it’s not the latest model that recently debuted. It’s a bit too new for this showdown, but the previous generation hot hatch with 306 hp is certainly up to the challenge. All three vehicles change gears the old-fashioned way with a manual transmission.

Obviously, one vehicle here is unlike the other two. Whereas the Honda and Hyundai have boosted 2.0-liter engines, the GR Corolla uses a turbocharged 1.6-liter three-pot. It’s also all-wheel drive, whereas the competition turns the front wheels only. With 300 hp on tap in the Corolla, it surely has the advantage here, right?

Launching on an unprepped surface, the all-paw GR Corolla absolutely leaps to an immediate lead. However, we’ve seen the Elantra N pull off some surprising wins and this time around … yeah that doesn’t happen. The Type R with a bit more power can’t even chase down the Corolla before the finish line, though to the credit of both FWD competitors, the Toyota’s only real advantage is at the launch.

That’s brought to light in a second drag race, this time with a rolling start. All three cars pull away evenly, with the Elantra falling back ever-so-slightly. At first, anyway – the turbocharged sedan sticks with the Toyota for the rest of the run, but neither can match the Civic Type R. It slowly pulls to a lead, crossing the line two car lengths ahead of the GR Corolla.

How will the new Civic Type R handle the Toyota? That’s a showdown we can’t wait to see.