What an obliging lot you are. Within days of publishing the last report on our long-term RAV4 – which mentioned the troubles we were having with a tailgate that didn’t open wide enough and a creaky dashboard – we received two emails telling us in great detail how we could resolve both our problems. Talk about reader power! 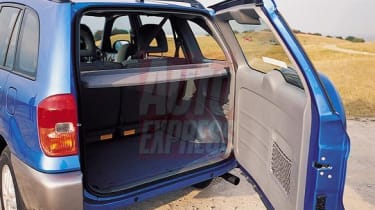 What an obliging lot you are. Within days of publishing the last report on our long-term RAV4 – which mentioned the troubles we were having with a tailgate that didn’t open wide enough and a creaky dashboard – we received two emails telling us in great detail how we could resolve both our problems. Talk about reader power!
For those without a working knowledge of the RAV4, let me explain the problems in more detail. The first is the tailgate, which only opens to an angle of 75 degrees – fine for getting shopping in, but useless for big and bulky items. The reason for this is simple. Euro legislation states that both rear lights must be visible to following vehicles – even when the tailgate is open. The RAV4’s rear end may be pretty, but when the tailgate is open-ed to any more than 75 degrees, the spare wheel obscures the right-hand light cluster completely.
The solution involves sourcing a US-spec check-strap (part number 68650-42040) and fitting it in place of the standard one. Our transatlantic cousins have different lighting laws to us and as a result, all US RAVs have tailgates that open to 90 degrees. The downsides of fitting the longer strap to a UK car? Well, technically, your car would still be in breach of lighting regulations if you parked at the roadside with the tailgate open at 90 degrees. It’s also rather pricey. The part alone costs £60 and that’s before shipping from the US. Given the cost and the hassle factor, we’ll probably be sticking with the standard set-up.
The second problem concerns a creaky dashboard – a common problem. The noise is caused by a length of underbonnet cowling which rubs against the body panel that holds the base of the windscreen, causing a cracking noise whenever you go over bumps. The solution is a Toyota repair kit which consists of felt pads. When stuck between the cowl and the bodywork, these cure the problem completely. What’s more, the job is covered under warranty. Just quote Toyota Service Bulletin NV004-01 to your dealer. If that fails, I’ll E-mail you the document myself.
But don’t get the idea that our RAV has been a problem child. Far from it. Almost everyone who has driven it has returned glowing with praise, while its reliability record has been flawless.
We’re particularly impressed with the engine. A diesel off-roader may sound like a driving enthusiast’s worst nightmare, but the combination works remarkably well. The RAV4 has always had a chassis that a hot hatch would be proud of, but even we weren’t expecting it to feel this good with Toyota’s 2.0-litre D-4D motor sat between its front wheels. Decent levels of torque and a lovely short-throw gearbox combine with light controls to give a driving experience that demands little, but delivers plenty. Sure, it rattles like a bottlebank in an earthquake when it’s cold, but once up to temperature, it’s flexible and fun to use. But the icing on the cake is the 41.6mpg fuel consumption.
For an off-roader, it’s also remarkably practical. In terms of outright storage space, it runs our long-term Range Rover close – and that’s before you start taking the seats out. I’ve only needed to remove the rear bench on one occasion, but the whole procedure is straightforward – although the seats are on the heavy side.
With just over 6,000 miles on the clock, the RAV4 is getting into its stride, and the recent poor weather and the deteriorating state of our roads have made it a favourite on the Auto Express fleet. Perhaps I should start hiding the keys…

END_OF_DOCUMENT_TOKEN_TO_BE_REPLACED

END_OF_DOCUMENT_TOKEN_TO_BE_REPLACED
We and our partners use cookies on this site to improve our service, perform analytics, personalize advertising, measure advertising performance, and remember website preferences.Ok