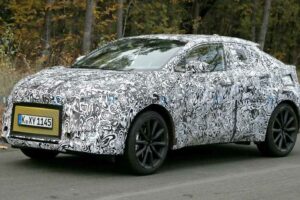 Near the end of 2021, Toyota blitzed the world with a plethora of concept vehicles showcasing its electric future. One of them was called the Small SU EV, and it essentially passed out of mind until today. Now, our spy photographers in Europe caught a heavily camouflaged test vehicle on public roads matching the SU EV’s shape.

It’s important to note that at this time, we have no hints as to the name. We don’t think the production model will be called SU EV, but then again, we have the bZ4x and C-HR already in the lineup so Toyota isn’t a stranger to weird branding. In any case, our first look suggests much of the concept’s styling cues will make it to production. Despite heavy coverings, we can see the lower fascia is different from the concept. A honeycomb pattern is barely visible through openings for integrated driving lamps, neither of which were present on the vehicle we saw in 2021.

That pattern suggests some kind of vent or grille behind the camo, and there’s also the square mesh on the outside in plain sight. That could be a red herring, designed to make us think this is a pure electric model. However, a close look at the back shows something resembling a tailpipe under the fascia on the right side. Despite EV in the concept’s name, it’s quite possible Toyota will offer the production model both as an EV and a plug-in hybrid. As such, it could utilize Toyota’s E3 architecture, befitting PHEV and BEV powertrains.

Toyota unveiled its bZ Compact SUV concept at the end of November for the 2022 Los Angeles Auto Show. Some might be tempted to say this could be a production version of that model, but its proportions don’t quite match up. This test vehicle is smaller with a sleeker, coupe-like shape. When you match it up to Small SU EV photos, the resemblance becomes clear.

This is our first sighting of an SU EV test vehicle. We don’t have any estimates at this time for a reveal, though it certainly could happen by the end of the year. When that happens, it may replace the C-HR in Toyota’s lineup.