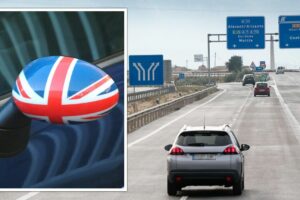 With summer around the corner, thousands of Britons will be looking to go on holiday in Europe to soak up the sun. However, drivers in the UK and expats abroad are being warned of potential large fines and even jail time if they do not abide by the rules of the road.

Compared to France, Italy, Germany and Spain, the UK has the lowest speed limits, with lows of 20mph in residential, up to 30mph in urban, 60mph in rural areas and reaching up to 70mph on the motorway.

When driving through scenic urban routes in France, Italy and Germany, drivers are limited to 31mph, whereas you can reach up to 80mph on motorways.

On Spanish motorways, the speed limit is slightly lower, with drivers banned from going faster than 74mph.

Some motorists may even have their licence revoked if they travel 40mph over the speed limit.

In other countries such as Spain, motorists can even face jail time and a heavy fine for speeding.

Around 10 million Britons are at risk of being fined for speeding when visiting Spain annually.

In Italy and Spain, dipped headlights must be used in poor daylight visibility.

Dipped headlights are required on motorcycles at all times in Spain, as well as when going through tunnels, with reminder signs before and after the tunnel.

However, in France, it is recommended that all drivers use dipped headlights at all times to ensure safety.

As of May 1, UK driving licences are invalid in Spain for permanent residents of over six months.

British expats who were not able to exchange it for a Spanish licence before this deadline will now have to take a new test.

However, tourists will be able to use their UK driving licence as normal.

If they have a child under 12 or less than 135cm tall, then they must be seated in an appropriate child restraint when in the UK and Spain.

In France and Italy, if the child or children weighs up to nine kilograms, then they must travel in a rear-facing car seat, in the back of the car only.

German law requires children up to 12 years of age who are less than 1.5 metres (59 inches) to ride in an approved car seat or booster.