Home » Car Reviews » ULEZ charge: How much new daily cost is- and where is affected

ULEZ charge: How much new daily cost is- and where is affected 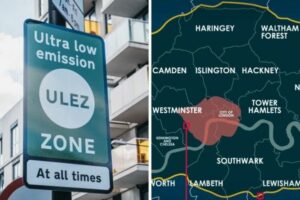 From October 25, the ULEZ zone is expanding and will affect more people in London. The goal is to tackle air pollution by cutting back on how many vehicles are on the road. It’s not just about where you drive though, the scheme is also buckling down on old vehicles that produce too much polluting nitrogen dioxide. Express.co.uk reveals everything you need to know about the ULEZ charge.

The original Ultra Low Emission Zone came into play in April 2019, and we’ve seen the number of cleaner vehicles in the area increase from 39 percent to 80 percent since 2017.

This was achieved by forcing drivers, particularly those in older vehicles, to pay extra charges for driving in central London.

This zone runs 24/7, every day of the year except Christmas Day, and the Mayor of London has decided to extend the area to get other people to comply with the sustainable standards.

The goal is to achieve 80 percent of trips across London through walking, cycle and mass transport by 2040, rather than people driving alone in cars.

Next week, the existing ULEX will expand to include more areas within the North and South Circular roads.

This single, larger zone will affect more motorists than ever before, and according to Leasecar UK and Lease Electric Car UK, motorists of older, higher polluting vehicles could face paying in the region of £10,000 a year just for driving their car every day in the area.

That’s the estimated annual figure facing drivers who qualify to pay the 24-hour ULEZ (Ultra Low Emission Zone) fee on top of the Congestion Charge (currently between 7am and 10pm) – if they need to pay both.

The North and South Circular Roads are not included in the ULEZ, but the area extending from central London up to the roads will be.

It will cover Central London and most of Greater London, including:

Not sure if your area or normal route is impacted? Find out here.

How much is the new daily cost?

The new scheme’s principle is the “polluter pays”, and around 138,000 vehicles are predicted to be non-compliant and will need to pay the charges.

Compliance depends on whether or not your car emits too much nitrogen dioxide – a pollutant that harms lungs and worsens illnesses like asthma, lung and heart disease.

You can check if your vehicle meets the standards here.

The zone is complete with over 700 cameras that will monitor activity and ensure people aren’t dodging the fee.

Road signs and advanced information signals will inform motorists if they are entering the zone and cameras will read number plates of vehicles driving in the zone to determine if they comply with the ULEZ standards, so it’s not hard to tell if you are breaking the law.

If you do not pay the charge and your vehicle is non-compliant, you could receive a £160 fine.

The scheme is predicted to make around £1.9 million per day, but this is just a fraction of the set-up cost which was between £90 million and £139 million.

If the scheme does make money, the funds will be invested in other transport schemes.