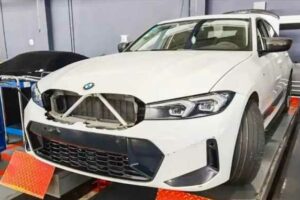 How time flies. The G20 generation BMW 3 Series made its debut almost three years ago at the 2018 Paris Motor Show. BMW usually follows a set cadence when it comes to its most important models: debut a new car, then three years later update it. If these leaked images are any indication, then it appears the G20 3 Series is going to follow this trend.

Instagram user @wilcoblok (who has a knack for posting leaks that end up being the real deal) recently posted the front end of what is almost certainly the 3’s new face. As you’d expect by now, it’s the same old story with the grille—it’s bigger, but at least it’s not quite as big as that of its 4 Series counterpart. Additionally, it appears the headlights get reworked, with the daytime running lights moving above the main beams. There are new, more aggressive side intakes, too, and the front bumper seems to benefit from a much deeper chin.

The car in these images is likely the updated M340i variant, though we aren’t sure if it will keep that particular name when the silk is officially pulled off the likely 2023 model-year sedan (BMW likes to mess with its alphanumeric nomenclature with dizzying frequency). Note the car’s very M-like side mirrors, sporty graphics along the sides, and (because the trunk just so happens to be open) lip spoiler on the trunk lid.

We expect the refreshed version of the 3 Series to come with other goodies inside, too. BMW’s latest iteration of iDrive has already made its way to the i4 and iX electric vehicles, and it will likely appear within the refreshed 3 Series. A simplified center console and bigger screens will likely make the 3’s insides a better place to spend time.

The BMW 3 Series was, for quite some time, the compact luxury sedan benchmark. But the competition continues to improve, and BMW has since lost its iron grip on the segment’s crown. In fact, there are a half dozen other cars in the same class we prefer to the Bimmer. Can this upcoming refresh save the 3’s legacy? Only time will tell.