US: In Q3, Mitsubishi Sold The Last Few 2022 Outlander PHEVs 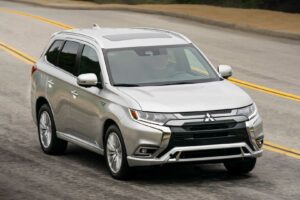 Mitsubishi Motors North America (MMNA) reports that its US sales decreased during the third quarter of 2022 by almost 30% year-over-year to 16,782.

The Japanese company explains that the volume has been “tempered heavily by supply constraints of the most in-demand vehicles and trims”. On top of that, “the port and dealership closures due to Hurricane Ian further tighten supply amidst ongoing industry-wide supply constraints.”

In the case of the plug-in hybrid Mitsubishi Outlander PHEV, Mitsubishi says that only six were sold during the quarter (compared to 1,008 a year ago), because the stock of the 2022 model year is basically empty.

Mitsubishi is now waiting for the first shipment of the all-new 2023 Mitsubishi Outlander PHEV, which will be significantly improved over the outgoing version. The first units are expected in showrooms in November… so one more month of waiting.

“Having sold the last of the 2022 Outlander Plug-in Hybrid Electric Vehicle (PHEV)s in July, MMNA anticipates substantial sales increases for the model as the next-generation flagship 2023 Outlander PHEV enters showrooms in November 2022.”

It will be really very interesting to see whether the new Mitsubishi Outlander PHEV will make a significant splash in the US.

Mitsubishi Outlander PHEV sales in the US – Q3 2022