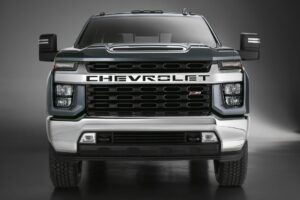 Gains made in size and weight appears to be a byproduct of each passing vehicle model generation, and this seems to be particularly pronounced in the full-size pick-up truck segment that is most popular in North America.

According to measurements taken by Consumer Reports, the bonnet of the 2020 Jeep Gladiator measures 45.5 inches (1,115 mm) tall, and is marketed by Jeep as a vehicle that can “conquer” the road and is part of a cultural phenomenon that demands vehicles for everyday use become larger, according to the report.

Analysis of industry data by Consumer Reports shows that the height of bonnets on passenger trucks has increased, on average, by at least 11 since 2000, and new pick-up trucks have become 24% heavier between 2000 and 2018. On trucks such as the Ford F-250, the front edge of its bonnet is now at least 55 inches (1,397 mm) tall, or as tall as the roof on some sedans, according to the publication.

New data compiled by Consumer Reports found that drivers of these newer, larger vehicles have poorer lines of sight, which means that pedestrians or smaller vehicles can be hidden directly in front of them. “These trends are alarming. Automakers must put safety first for people inside and outside the vehicle,” said Consumer Reports manager of safety policy William Wallace. The report cites findings by the Governors Highway Safety Association which reported that more then 42,000 fatalities and 4.8 million serious injuries occurred on United States roads last year, or an increase of 8% over the years before that, despite the reduction in distance traveled.

Pedestrian fatalities increased 46% over the same period, according to the association, and while low-income groups and the demographic of less mobile persons such as the elderly and wheelchair users are overrepresented, says Consumer Reports, it says that a “growing body of research” indicates that the increasing dimensions of pick-up trucks may be contributing to the deadliness of crashes involving pedestrians or occupants of other, smaller vehicles.

Consumer Reports asked the largest manufacturers of pick-up trucks in the market – Ford, General Motors and Stellantis – why have these models grown so tall? While a spokesperson from Stellantis declined to comment, a Ford spokesperson said that the automaker had “shifted [away] from softer lines because customers prefer more purposeful looks.”

The publication cites industry analysts in saying that larger trucks with more imposing front ends have been a factor in successful sales strategy, and even though safety advocates say truck designers could lower bonnets or reduce vehicle’s weight, automakers are reluctant to do so because pick-up trucks are a major profit source, and their success has been driven by the aforementioned design cues.

“Trucks could look less tough, but you don’t want to be the one to make your truck look soft. You can charge a lot for the capability and the image,” said JD Power VP for data and analytics Tyson Jominy. An automaker might make four to five times more money on a pick-up truck than from a sedan because not only is truck manufacture simpler; buyers will also pay more for a pick-up truck, Jominy said.

To that end, more luxuriously outfitted trucks can also be status symbols, particularly those priced in the region of US$60,000 (RM247,110) in the United States. According to Consumer Reports, the US government provides incentives for purchasing these larger trucks. These trucks are not subject to “gas-guzzler” taxes, heavy-duty trucks are subject to less stringent fuel economy standards compared to passenger cars and small trucks, while small-business owners receive a larger tax write-off for buying these heavier vehicles even if their occupation does not require it.

Less surprising is the outcome of a large truck or vehicle in real-world collisions with pedestrians, compared to the same with normal passenger cars. A pick-up truck’s tall front end and higher front bumper are more likely to cause serious injuries compared to a lower vehicle, as the larger vehicle transfers energy directly to the pedestrian’s hips and pelvis, said Insurance Institute for Highway Safety (IIHS) Becky Mueller.

These larger trucks also put smaller pedestrians at greater risk of head injury as there is greater risk of head-to-bonnet contact. The truck’s combination of a taller bonnet and higher ground clearance also makes it more likely that the pedestrian could be run over, which is an even more deadly scenario, says Mueller. Also unsurprising is that larger, heavier vehicles perform worse when they need to manoeuvre to avoid crashes. “Pick-up trucks and other large vehicles routinely do worse in our emergency handling and braking tests,” said Consumer Reports senior director of vehicle testing Jake Fisher. Meanwhile, when a truck and a car collide, the driver of the car is 1.59 times more likely to be killed than in two-vehicle crashes not involving a pick-up trucks, according to the IIHS.

Given that men are more likely to buy – and crashing in – pick-up trucks, that means a greater likelihood of women getting involved in crashes in a smaller car, where the other vehicle involved is a pick-up truck, according to an earlier IIHS report.

While the United States National Highway Traffic Safety Administration (NHTSA) plans to announce upgrades to its New Car Assessment Programme this year, Consumer Reports says that automakers are unlikely to go against consumer demand and downsize their trucks.

Angie Schmitt, founder and principal at 3MPH Planning and Consulting, a pedestrian safety firm recommends that states and cities lower their speed limits and improve cyclist and pedestrian infrastructure in areas where trucks share road space with people. “If our vehicles are going to be getting so much bigger and so much more lethal to pedestrians, it also falls on road designers to do a better job protecting them,” Schmitt said.