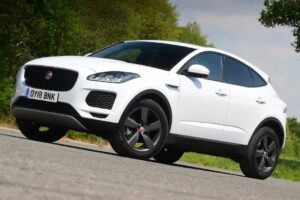 The E-Pace quickly became Jaguar’s most popular model, but it’s competing in a very crowded segment and has its work cut out trying to stand out from its rivals. Practicality is a major plus point thanks to some impressive packaging, while the premium badge and upmarket cabin are other reasons to be tempted. But those things are available elsewhere, with the Volvo XC40 a particularly appealing proposition. When we pitched an E-Pace against a Tiguan, the Volkswagen won, and none of the other German options listed above are lacking in appeal. So while there’s plenty to like about the E-Pace, we’d suggest that you try one or two alternatives first, to make sure you’re picking the right premium compact SUV.

Jaguar celebrates its centenary this year, and for almost all of its life this quintessentially British company (albeit now under foreign ownership) has focused on graceful saloons, coupés and roadsters.

When SUVs became popular, Jaguar said that it wouldn’t jump on the bandwagon because that would compete directly with its other half, Land Rover. But with buyers clamouring for premium SUVs, Jaguar could no longer resist making its own model, and when the F-Pace was launched in 2016 it soon became the firm’s most popular model.

It made perfect sense to introduce a smaller, more affordable SUV soon after, and within a year the F-Pace had a cheaper sibling, in the form of the E-Pace, which soon became Jaguar’s biggest seller. How does it stack up, five years on?

There was improved connectivity from May 2021, with Apple CarPlay and Android Auto becoming standard, and along the way there were two limited-run models. The Black Edition came in January 2019 with D180 or P250 engines, then four months later the Chequered Flag went on sale in D150, D180, P200 or P250 forms.

The D180 auto is the most common E-Pace, and arguably the best. However, the front-wheel-drive D150 is more fuel-efficient and probably muscular enough if you’re not towing. The PHEV is costly to buy and rare, while the petrol editions are quick, but will cost a lot in fuel if you do a lot of miles.

Alternatives to the Jaguar E-Pace

The E-Pace shares much with the Range Rover Evoque, and that car provides some very tough competition. Another potential rival is the Volkswagen Tiguan, which is refined, user-friendly and good to drive, while three more German brands give the Jaguar a hard time: Audi with its Q3, BMW  with the X1 and X2, and Mercedes with the GLA. All of these have a premium image, are solidly built and come with cutting-edge tech – and all of them are expensive to buy, if not necessarily to run.

The Volvo XC40 offers stiff competition, too, with its impressive safety credentials, smart styling, plus excellent refinement. There are very few E-Pace plug-in hybrids available, so we’d suggest that you consider the sharply styled Lexus NX instead.

All trims were offered with an R-Dynamic pack, which added a bodykit, sports seats, a black headlining and sportier details.

Updating the map has caused problems, because it has to be done via a memory stick. It can be carried out at home, but it’s easy to get wrong.

There are threads on E-Pace forums about DPF and oil-dilution problems. Unusually, it doesn’t seem to be due to too many short journeys or low-speed miles.

Jaguar forums reveal a number of owners have experienced technical issues with the E-Pace’s infotainment system. Other electronic issues have also been reported relating to lights and sensors, as well as build quality problems in the cabin.

The E-Pace’s dashboard looks impressive and the same goes for Jaguar’s choice of materials, in the main. There are a few cheaper plastics here and there, but the fit and finish are generally very good. So is practicality, with lots of cubbyholes and rear-seat head and legroom. Even better, this isn’t at the expense of boot space, with 577 litres with the back seats up, rising to 1,234 litres when they’re down.

E-Paces from the 2021 model year were fitted with Jaguar’s newer Pivi Pro infotainment system, which is far better than the previous InControl system. Tech lovers will therefore want to stretch to a newer model.

All E-Paces need to be serviced at least every two years or 21,000 miles. However, Jaguar uses a condition-based maintenance regime, which tells the driver when servicing is required based on how the vehicle is used.

Unlike some other such systems, which allow for parts to be replaced only when necessary, the E-Pace still needs to have various parts replaced at specific mileages, which is why the costs are fixed. The three levels of maintenance run in sequence: Minor (£345), Intermediate (£467) and Major (£695). Included in this cost is fresh brake fluid every other year (otherwise priced at £47), while the use of long-life coolant means there’s no set schedule for replacement. All engines are chain-driven, so there are no cambelts to replace.

The E-Pace has been recalled on six occasions. The first three times were in March, April and May 2018. That initial campaign was because of poorly manufactured fuel lines, which could lead to leaks in some cases; only E-Paces made up to August 2017 were affected.

The next recall was because 86 E-Paces had been fitted with poorly secured brake hoses, which could leak as a result of chafing. Cars with a manual gearbox could suffer from a glitch that stopped the reversing lamps illuminating; a software update was required. Excessive CO2 emissions were behind recall number four, in March 2019, then in February 2020 came recall five, due to faulty front seat frames. The most recent recall was in June 2021, because of faulty fuel hoses.

The E-Pace has never appeared in a Driver Power survey, and there was just one Jaguar in the 2020 poll: the XF Mk2 in 47th place. According to owners forums (which have a few grumbles, but nothing too frightening) and our 2020 Brands survey, in which the firm came a respectable 12th out of 30, owners like the driving experience, performance and design, but not the quality, running costs or reliability.