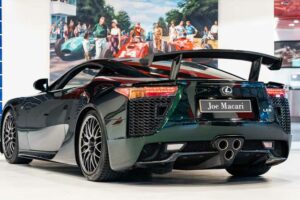 Take a sleek, sultry body, (much of it produced in carbon-fiber-reinforced polymer) and carefully place it atop a capable suspension while arming the whole deal with a sonically pleasing 10-cylinder power plant that revs to 9,500 rpm, and you have the ingredients of a supercar. Go on to limit production to just 500 models over a few years and include a small group of special edition models, and in the current climate that’s seen Japanese favorites skyrocket in pricing, you have the complete recipe for a highly desirable collectible such as the Lexus LFA.

That all plays into the monumental price tags tied to examples of Lexus’s LFA, the coupe that was the talk of the automotive town upon its release over a decade ago. These rare supercars have experienced a massive surge in value over the years as collectors do their best to find and acquire them. Just a few days ago, this 12,000-mile LFA went home to a new owner and, as expected, it wasn’t cheap.

With relatively low mileage and only two private owners, the asking price of $1,137,968 seems warranted, given the number of these beauties in existence and the sort of dollars they’ve demanded since production ceased almost a decade ago. Add to that the fact that this model was equipped with the rare Nürburgring Package and its value escalates further.

Of the 500 LFAs ever produced, 64 were blessed with the series of extras that make up the Nurburgring package. Mechanically, the transmission was calibrated to shift a bit quicker than the standard model’s unit, and an additional 10 hp was on tap, bringing output up to 563 hp. Bolder suspension and more adjustability were baked in, while externally, a carbon fiber splitter, bumper canards, and rear wing were bolted on. Lightweight magnesium BBS wheels were fitted to signal its extra special status.

Like all LFAs, the combination of options was almost limitless, with buyers given the opportunity to select various colors and materials to suit their tastes. In the case of the Nürburgring package, the (then) $375,000 LFA price tag was increased by $70,000. And while the “build your own LFA” program had countless details to choose from, the Nürburgring package offered just four paint options; Race Yellow, Glossy Black, Matte Black (an additional charge was added for this option), and Whitest White.

This example is sporting a deep green exterior with minute gold flake, you might be wondering how this LFA eluded one of those four paint choices. It didn’t, because this isn’t a color change, at least not in the traditional sense. Instead, this LFA was given a new hue with TopazSkin, via an “Emerald T” body wrap; the original Whitest White Lexus paintwork remains intact underneath. TopazSkin’s modern-day process is similar to paint protection film (PPF) in that it offers a barrier of shielding and some minor self-healing ability, but this version is fully customizable.

TopazSkin looks exactly like actual paint, rather than the somewhat muted appearance of a vinyl wrap. Any color you can imagine can be used and the labor-intensive process offers complete coverage of the car’s exterior and is said to be entirely reversible. Approximately four to five times thicker than OEM clear coat, the application can be thickened in more vulnerable sections of the vehicle, like its front bumper, hood, and mirrors.

If the price sounds astronomical, even with the 1-of-64 models ever produced highlight, keep in mind that this isn’t the highest priced LFA to find a new home. Earlier this year, a black Nürburgring Package LFA was sourced through RM Sotheby’s Monterey auction for a cool $1.6 million.